Apple has announced a slew of software updates to its devices in the ongoing WWDC event, which are is aimed at bettering your experience. Among them, iOS 15 has a special place since the updates it received are cooler than ever. It has a new Notification Summary, an intelligent DND mode to let others know you’re busy, and a Focus mode to suggest you relevant things for focusing on your work.

The Worldwide Developer Conference (WWDC) event of Apple, though happening virtually, has some good stuff being revealed. Apple has announced interesting features to its new iOS 15 OS, which will be rolling out soon. The new OS has an intelligent Notification Summary, which will summarise the notifications that came in for a quick glance. 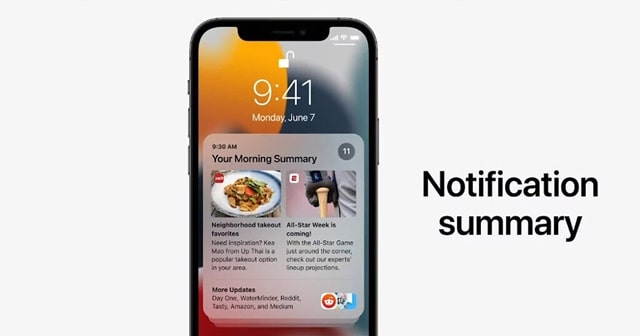 And it’s intelligent because it shows up the important stuff atop of all, in an easy-to-use model. Users can then browse through the summary or open up for whole notifications list. Apart from this, there’s a new DND feature that will let others know that you’re busy when being contacted.

So if your turn on Do-Not-Disturb Mode in iOS 15, your OS will silence the handset from incoming messages and calls. Simultaneously, when someone tries contacting you by either means, they’ll be notified as you’re busy. Although, Apple lets some messages/calls bypass this in case of true emergencies.

You will also see the widgets being suggested accordingly. And to note, the Focus mode can sync across all your connected devices, thus no need to worry about turning it on for every working device.