What Makes a Country Suitable for Offshoring?

Let’s dive into the top offshore software development countries in no particular order. 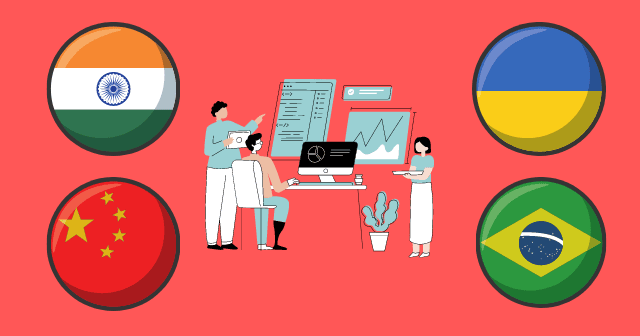 Here are some of the best countries for outsourcing software development, according to global polls.

India is one of the best countries to outsource web development. More than 250 top global companies offshore some form of software development to India. Developer rates are among the cheapest hourly rates in the world.

Because India places a lot of focus on STEM education (training more than 2.5 million developers every year), the developers are highly skilled. However, the time zone difference isn’t ideal for US or UK companies.

China is comparable to India in terms of cost and skill level. Universities in China train more than 5 million software developers every year that are adept at skills like Python, Shell, and functional software programming. It is also an excellent choice for companies that want to explore Artificial Intelligence and Robotics.

However, while there are plenty of developers for hire, not very many Chinese residents are proficient in English and there are significant cultural differences that executives and local teams may find challenging.

Vietnam’s outsourcing industry is booming, although it hasn’t been an obvious choice up until recent years. The most common programming languages in Vietnam include Java, PHP, .Net, and e-commerce-related technologies. Large companies like Nokia and IBM are starting to invest in Vietnam.

Ukraine is one of the best countries for offshore software development. Ukraine has a pool of 200,000 highly specialist developers, adding over 36,000 new tech graduates every year. More than 4000 tech companies and 1600 software outsourcing companies have made Ukraine their home, which means that developers are among the most experienced and specialized in Eastern Europe.

Brazil is one of the top countries for outsourcing software development in Latin America, with more than 450,000 trained software developers. Most developers are proficient in English, and the time zone is favorable for companies in the US.

It is an excellent choice for companies that require expert knowledge in Java, SQL, and Python. However, developers in Brazil charge a premium compared to the other countries on this list (up to $50).

If you are looking for the best offshore software development countries globally, look at China, India, Vietnam, Ukraine, and Brazil (among others). You’ll find highly skilled developers at a fraction of the cost of a local team. Offshoring is easier and more affordable than ever before. Look to an offshore destination if you need to get a project off the ground quickly and cheaply.