One of the simple and easy ways to hack someone’s phone is using Spyware. Anyone can download the app and spy on anyone’s device. Anything can be spied on like Emails, Personal information, Contacts, messages, and more. And no one wants their device to be spied on as everyone is concerned about their security.

How can you know if your phone is being spied on? Your device battery drains faster, or some unusual activities are seen on the device. If you are worried about your phone, you can use these Anti-Spy apps to protect your phone from spying. These Anti-Spy apps can check for hidden spy apps on your android smartphone.

Privacy Scanner Antispy app is free to use app that helps you to check whether your device is being spied on or not. It detects the parental control and monitoring apps that might be misused to spy on your family members by using GPS-Track technology, read contacts, call history, and more.

The User Interface of the app is spotless and easy to use. You can detect any malware in the app and protect yourself from trouble. The app has both paid and free versions, and both have few differences.

Like, few of the features can be used in the premium version only like, if the user has activated the Pro version, they can detect newly installed apps, can daily schedule background scanning, and much more. (Users can use the free version or can upgrade to premium).

Features of the app: 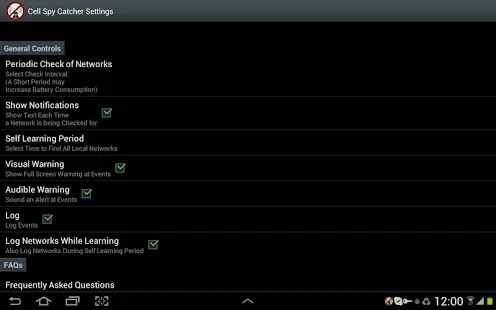 Do you know the cell spy devices can take important information from nearby smartphones? These phones can be carried in hand or can be fixed to public transportations. Nobody wants their phone to be spied on by anyone.

So, you must try this Cell Spy Catcher app that detects a cell spy, and if something is wrong, you will get a warning by a red screen or by a sound. Whenever you get a warning, immediately switch off your phone and stop the intruder from spying on your phone. The app is straightforward to use, and it will not drain your battery much. 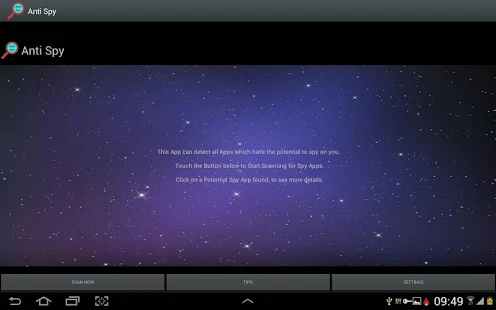 Anti Spy app is one of the best apps for Android users to stop someone from spying on their phone. It is straightforward to use as you need to tap on “Scan Now,” and it will scan all the apps.

Once it detects any malicious apps, it will immediately remove the spyware and the apps. It can detect all the hidden spy apps also, so no need to worry about it. The app is free to download from Google Play Store.

Features of the app: 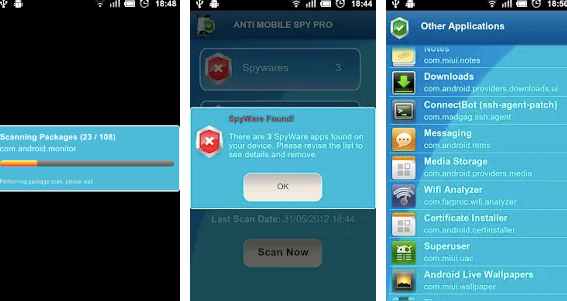 Anti Spy Mobile free app detects all the malicious spyware running in the background and trying to steal your data. This app immediately removes the spyware and block it. Whenever a new app is installed on your device, it detects the app is spyware or not. However, not all the features can be used in the free version as you need to upgrade to a PRO version.

In the Paid version, it scans the background and notifies the situation in the status bar. If it detects anything suspicious, it removes it at the same time. 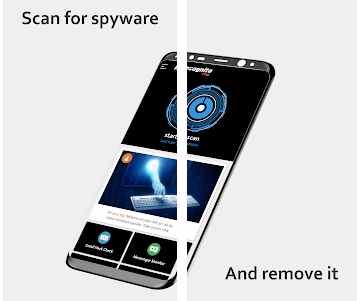 Are you concerned about your security? As there is so much malicious software available to gain access from your device and steal information. If you are worried about your device, then start using this Spyware Detector app. It blocks the virus, spyware, and malicious apps.

Your device will not get any ransomware attacks with the help of Spyware Detector. This app gets updated automatically, and it is safe for web browsing also. If any spying app is detected in your phone, it notifies you immediately. 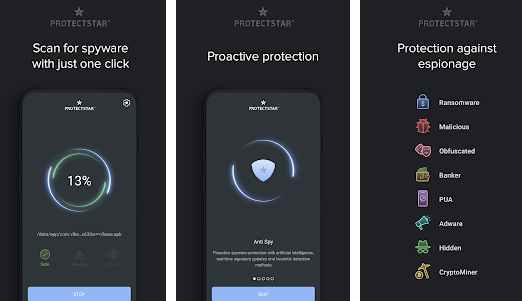 Download the app, and it will learn whenever your phone has installed a spyware app or is infected by a malicious app. It is dangerous if someone reads messages, track location and check contacts. However, you don’t need to worry about anything if you are using this app to detect, monitor, and control apps.

There is a little difference between the free and Pro versions. The advanced heuristic engine lets the app detect the new and unknown spy apps that act as a system service. 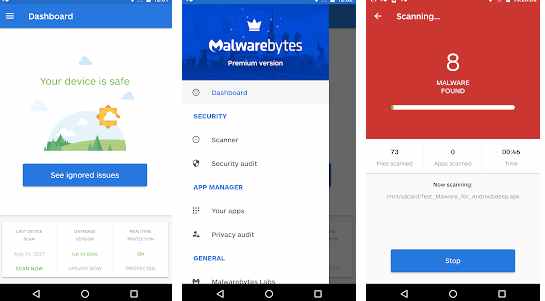 Malwarebytes Security is the most trusted app when it comes to security. The Setup Wizard of the app makes the installation process, device scan, and spyware removal easy. Even this app has a free and paid version, where for free, it detects and removes all the known spyware.

However, the paid version can scan the incoming messages, and if it contains malicious URLs, it blocks them. Before you pay for this, you can try it for free for 30 days. Then you can get it for $1.3 per month.