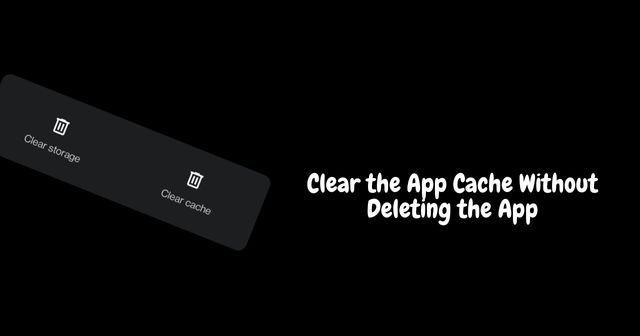 Also, one or more apps may be important to you and you cannot simply delete them. Hence, there is the process of app offloading in iOS and app cache clearing on Android.

If you use the latest version of Android OS, you can clear the app cache for any app from the respective app settings.

Otherwise, you can head to the device settings and access the individual app settings to clear the cache. You will see two options. One is to clear only the app cache and the second is to delete the app data.

2. Steps to Offloading an App on iPhone or iOS

Now, grab your iPhone, and let’s start to offload the app and clear its cache. When you offload the app, it will free up the storage used by that application. However, a part of the app data remains unaffected. It remains stored in the system.

On this app offload screen, you will see detailed app size information. Also, there will be a mention of the storage consumed by the documents and app. You can repeat the above steps for any apps installed on your iPhone.

Also Read- How to Turn Off iPhone Screen Rotation

If you have an iPad, the same steps will also be applicable. Remember to relaunch the app to start using it again once you have finished offloading it to clear the app cache.

With this, I’m concluding the guide on how to clear app cache without deleting the app. If some features of an app are not working, then I suggest you clear the app cache for that application. That will fix the issues with that app.