Personal data of 70 Million AT&T customers allegedly stolen and are being sold by hackers at the price of $1 Million. The hacker is selling a database that contains customers’ information like names, numbers, addresses, and more. 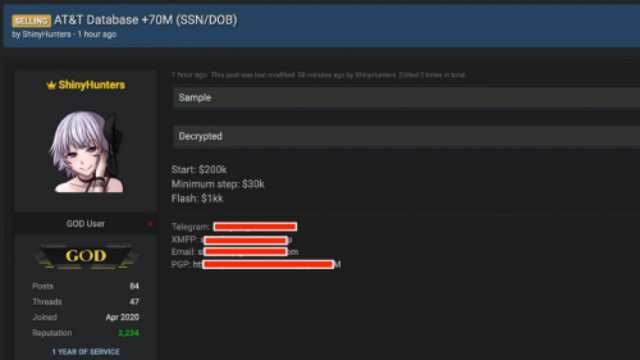 However, the company AT&T has denied that the personal information of the customers came out from its systems. According to the reports from Restore Privacy, the hackers are ready to work with AT&T if the company makes an arrangement.

Restore Privacy says the culprit is a well-known hacker known as ShinyHunters who has done many breaches in the past as well. Previously, he hacked companies like Microsoft, Tokopedia, Pixlr, Mashable, Minted, and more.

The hacker is asking $1 Million for the AT&T database. A culprit has provided proof of the data breach. But the company denies that any data breach has occurred. To which hacker says,” they will keep denying until I leak everything.”

According to the hacker, the details of 70 million customers are at risk of fraud. ShinyHunters wants the company to pay them, and they are selling the access to other hackers as well.

AT&T released a statement that says,

“Based on our investigation today, the information that appeared in an internet chat room does not appear to have come from our systems.” The hacker also issued something of a statement which said, “By the way, if AT&T is afraid and want their database taken off the market, they can contact me for an agreement, it has been done recently and both sides were satisfied.”

Recently, T-Mobile was also hit with a server attack that exposed the personal data of around 48 million customers.