While dealing with photos on your smartphones or PCs, you must have seen some of these files ending with an .AAE extension. This is nothing new for Apple users; however, if you are trying to open it on a Windows PC, it won’t display anything. Instead of the file, you will rather end up seeing an error message saying, “Windows cannot open this file.”

If you wonder what these files actually are and why they don’t show up on your Windows system, the answer is actually simple. However, that’s not just all. Some workarounds will help you make these files open in any other system, be it Windows or Android.

If you wish to really know more about these types of files and how to open them in system’s other than Apple, we have put together all the knowledge that would help you out.

What is an AAE file extension?

The files with an AAE extension are actually the edited versions of some existing photos or images edited on an Apple device. Earlier, Apple devices used to overwrite any edits made to the original photo with itself. 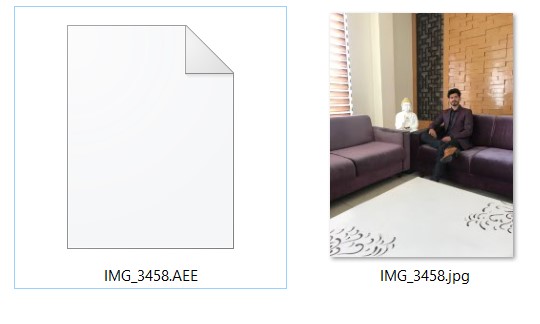 This resulted in the loss of the actual picture. However, with .AAE extension they have brought the concept of keeping a copy of the original file. It saves the actual photo or image without any changes made to it, while the edited file is saved separately in .AAE extension.

These edited images are saved in the same folder as their source file. Moreover, they also contain the same naming format except for the extension at the end, AAE.

Why can an AAE File Extension not be Opened in Windows or any other system?

The fact that the AAE file extension is native to Apple devices only makes it unsupportable in any other system than Apple itself. Whenever you try to open a file with an AAE extension in Windows, it will only display the message that ‘Windows cannot open this file.’

The same happens with any other OS as well. So this can sometimes get quite frustrating, which is why we have mentioned a few workarounds to overcome this problem in the next section.

How to Open a File with an AAE extension?

If you are already on an Apple device, it won’t take anything extra to open such files than the way you open any other normal photos. The problem arises when you try to open them in a different system. So, if you are on Windows or any other system and having trouble opening an AAE file extension, here is how you do it:

As soon as you finish editing your photos, you can directly mail them to yourself. This is probably the easiest way to open a file with an AAE extension without losing the edits. And you won’t have much trouble opening them in a different OS, too.

Another simple way is to upload your edited photos on Social Media platforms such as Facebook or Instagram. This way, you can retrieve the image anytime you wish to. However, this method’s only problem is that uploading photos to such platforms severely lowers your photo quality. This is why most users prefer the first method of mailing it to themselves than uploading them.

AirDrop is a feature exclusive for iPhone and Macbooks, which works flawlessly. In case you have Airdrop installed on your Android and Windows PC, you can transfer it via Airdrop. You can also use other transfer methods, such as Google Files, Share it, etc.

AAE file extension has no doubt made things a lot reliable for users. Although it is beneficial for Apple users, it is completely useless on platforms like Windows and Android. Since there is no way to open AAE files on other systems, we hope to see a solution very soon. Until then, you can use these tricks to work with this extension.