The most popular multiplayer game Among Us is once again targeted by hackers. Currently, the game is battling against the spam attack by the hacker. The spam is promoted by Eris Loris. This spam attack has become so bad that the developers of the game need to do emergency maintenance.

Among Us Scramble: Spam Attack by Hackers 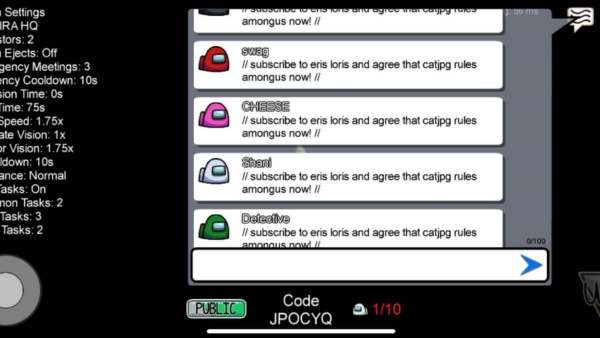 Two months ago, xQc streamed the game online, and from that time, Among Us had become a popular game globally. The game has entertained everyone, including streamers, casuals, politicians. It is a great time-pass game. But, now, the game is at risk as the hackers are troubling the game.

Here is the tweet by Innersloth, developer of Among Us:

Hello everyone,
We're are super duper aware of the current hacking issue and we're looking into it. We will be pushing out an emergency server update so people who are in game will get kicked from games. Please play private games or with people that you trust!!! Bare with us!! 😰

Recently, Players have experienced the “Eris Loris” spam while playing the matches. Eris Loris has designed Among Us hack, which is used to boost the whole group out of the game. A Reddit user first suffered from this hack, and he informed about the hack.

If you come across a player named Eris Loris in Among Us then ban them immediately. I was just in a game with them and they forced everyone in the lobby to text this message and it then immediately disconnected everyone. This is their YouTube channel with evidence that they wrote the hack.

The process of spam attack is something like this; in a chat, you will get a threatening message. You will see a message like this,

When someone gets this message, they will be booted out of the game. All the installed files might get affected at this point, so if you want the game to work properly, you need to reinstall the game.

This hack is spreading to everyone. So, it is better to stay away from public lobbies.

No matter whatever is happening, all the players are being targeted with the attack. The developers have rolled out the emergency server update in the middle of the night. However, there are no reports on the issue is resolved or not. Or the InnerSloth is planning future maintenance.

Many Among Us Player have posted a tweet regarding the attack:

among us hackers are some big fuckin losers

So yeah. I'm rolling out the server update. I'm using a faster method than I've done before, but it'll impact players more. Trying to be careful, but also, you might get booted. It's for the greater good at this point. Consider it an "emergency maintenance for ??? hours"