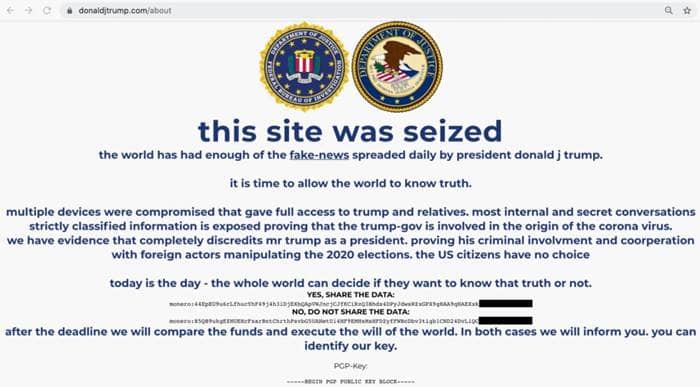 However, there are no other details on the hackers who have got full access to the trump website, or the internal and personal conversations were exposed. Within no time, the website went offline and was restored by the hacker.

.@realDonaldTrump's campaign website has been hacked. Doing research for a climate change article and this is what pops up: pic.twitter.com/Kjc2ELSdAV

While talking about the website hack, the spokesperson of the Trump campaign Tim Murtaugh says,

“website was defaced and we are working with law enforcement authorities to investigate the source of the attack. There was no exposure to sensitive data because none of it is actually stored on the site. The website has been restored.”

Just a few days ago, Trump said that nobody could be hacked. His words were,

“Nobody gets hacked. To get hacked you need somebody with 197 IQ and he needs about 15% of your password”.

The hacker claim to have inside information on the “origin of covid-19” and other information about Trump. They also provided two Monero addresses. It is a cryptocurrency that is difficult to track but easy to send.

The website was back to its original content after 30 minutes. No other evidence is there on what hackers have accessed.