Finger on the App Challenge Ends after 70 Hours! 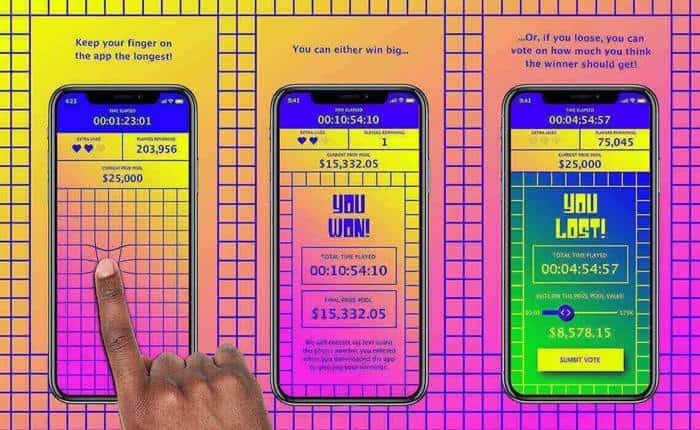 YouTube content creator Jimmy “MrBeast” Donaldson is famous for creating challenges in which he gives out a considerable sum of money to the winners. Now he has taken the challenge to the next level by creating a challenge called “Finger on the App” which was made in collaboration with internet collective MSCHF.

The Challenge involved the participants to keep their fingers on the screen of their phones, and the winner would get $25,000. Donaldson began offering thousands of dollars to some of the remaining players to take their finger off the app. On July 2nd two players took their fingers off the game for $5,000 each. Another 2 players took off their fingers for $10,000 each. At last, the challenge was stopped by Mr. Beast after 70 hours via a tweet and Four winners, each winning $20,000.

Dear the four remaining contestants with your finger still on the app, I’m ending it here. Three days is insane! You ALL win and will ALL receive $20,0000! CONGRATULATIONS!

Mr. Beast also tweeted out the players to grab some sleep but users called it out as a ploy to end the game. He made sure that people didn’t cheat in the game by making people change the position of their fingers to another part of the screen. He also said that he was glad that some robots didn’t win the challenge.

Mr. Beast has made a name for similar types of videos on YouTube. He has filmed videos over the last three years about making large donations or presenting challenges that will land friends and strangers new cars and homes. Despite the latest format his channel soared. He had also led the movement for Team trees in which people donated generously.

Mr. Beast said, “I think the beauty of the game is that we don’t really have control, It’s really up to the people playing and seeing who lasts the longest, and I think our main thing was just keeping the game fair.”