TechDator
Home Apple How to Fix iPhone Turning Itself Off and Won’t Turn back On? 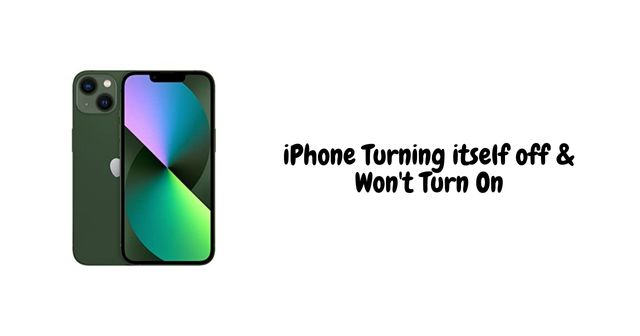 If we look at possible reasons, then probably iPhone is turning itself off due to some bug in the iOS. If your iPhone fell or got exposed to water, some hardware damage might occur. This then causes the device to turn off. Exposure to high temperatures will also cause the iPhone to turn itself off.

Best Tips to Fix iPhone Turning Itself Off

Here are the various troubleshooting tips you can use to fix your iPhone.

1. Put the iPhone into Charging

Often when you overlook the battery status, the iPhone may run out of juice and shut itself down. So, you should connect it to its charger and set it to charging. If there is no other issue for switching off, the iPhone should turn on once the battery starts recharging.

2. Let the iPhone Temperature Cool Down

Though it doesn’t happen often, the iPhone has this in-built mechanism to shut down when exposed to a higher temperature automatically. In this case, let it stay switched off until the temperature subsides.

You can check that by touching the backside of the iPhone. I suggest removing the hard case on the iPhone. It will allow better cooling. Also, do not put it on charging while overheating.

Also Read- How to Organizing Apps on Your iPhone

Did you recently install the developer beta of iOS? Then probably, it’s a bug causing the iPhone to turn itself off. To fix this, you can update the iPhone to a newer iOS that may be available.

Usually, if you have an active internet connection on your iPhone, you will automatically get notified about an available iOS update.

4. Fix the Water Damage on your iPhone

Did your iPhone recently fall into a water body? And after which, you are facing the issue of the iPhone turning itself off?

Then you need to check if the iPhone has been affected by getting submerged in water. There is an inbuilt LCI or Liquid Contact Indicator on the iPhone. When the iPhone has water traces, the LCI will turn red.

Also Read- How to Clear RAM on iPhone

Often force restarting the iPhone can fix bugs pretty easily. Here are the steps regarding how to force restart iPhones of various models.

Simultaneously press Volume Down and Sleep/Wake buttons until the Apple logo flashes.

Press and hold the Sleep/Wake button and the Home button simultaneously.  When the Apple logo appears on display, let go of both buttons.

6. Reset the Settings of iPhone

Another effective fix is to reset all the settings of the iPhone. When the next time your iPhone switches on, immediately perform this fix.

Before resetting your iPhone, ensure that you have backed up your device data to iCloud or a PC via iTunes. Resetting will erase every single piece of data and settings on your iPhone.

7. Get the iPhone to Apple Support

If you bought the iPhone from a local Apple authorized store, then take your iPhone to them. They will solve the issue of the iPhone turning itself off. Otherwise, you can contact Apple support online and get suggestions from the tech experts to fix the problem.

That’s all about how to fix the issue of the iPhone turning itself off and won’t turn on. For every one that uses an iPhone, it is their daily driver. Follow the tips in this troubleshooting guide to resolve the issue immediately.