TechDator
Home Definitions What Does FTM Stand For in Text ? (FTM Meaning)

Did you ever hear about the FTM but don’t know the exact meaning or context of this word. Then, you have landed in the right place as here we will explain everything related to FTM. There are various contexts where we use the FTM word in different situations.

FTM is used and may possess various meanings, such as pregnancy, texting, transgender people, etc. So, yes, it’s essential slang or an acronym. So, you do not need to worry if you aren’t familiar with this word; you can read this article till the end to get all the related information regarding the FTM. So, now without consuming more time talking, let’s get started with this.

What Does FTM Stand For in Text? 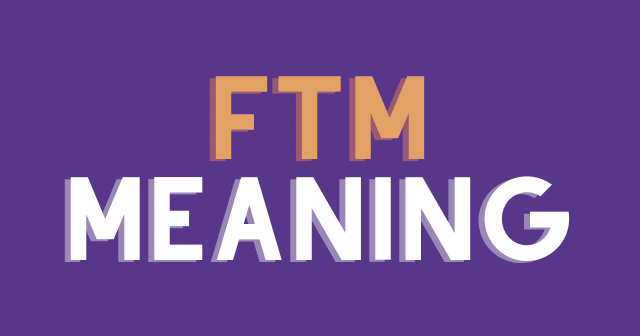 The FTM is mainly used in online chatting and text messaging to illustrate females to males. But, if we break down this word in an easier way, then the FTM is used to represent any person who is a transgender man born as a female. But, the fact is they behave, lives, and identify their life as a man.

What is FTM Short For?

It’s an abbreviation FtM representing both categories of tans, i.e., transgender or transsexual. It also indicates the direction of any physical transition that a person can make by either interacting with people/ society or with some medical help using surgery or hormone therapy.

What Does FTM Mean in Pregnancy?

From Where The Word FTM Originated?

Unfortunately, there is no detail available that confirms the origin of this acronym. But, yeah! It indicates trans men as a label as far back as Ancient Greece and Rome.

What Are The Other Possible Meaning of FTM?

As we have already stated, the word or acronym FTM is not limited to representing the female to male or first-time mom. It is also used as slang for different words such as For That Matter, First To Market, Follow The Money, File Transfer Manager, and Field Training Manager.

Is There Any Real Life Example Where We Use FTM?

Although we have already cleared everything regarding this, still you can take a look at the below example where you can use the FTM in any conversation:

Paul: hey, Tony had no idea that Simon was an FTM.

Tony: Wait! What? Really? I had no idea either.

Paul: Yeah, a common friend told me today. I was a little shocked, but I think it didn’t matter, and we would love him no matter what.

So, that’s all from our side on what FTM really stands for in text? We hope you have no idea about that. But, in case you know any other meaning of this word, feel free to let us know in the comment section.