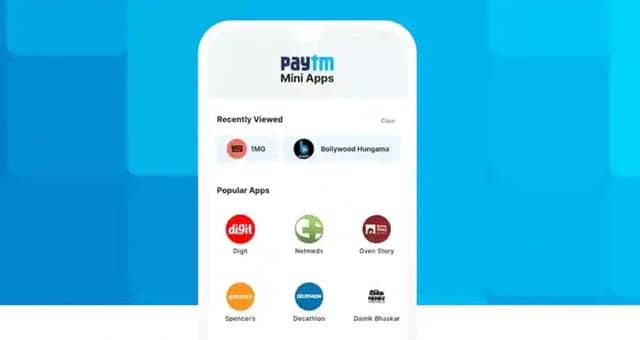 Digital Payments app Paytm has announced about the launch of its new app called “Mini App Store“. This app store can be accessed directly from the Paytm app. Recently, Google has taken down the Paytm App from the play store for violating its policies. So, this is a move to bring an alternative of Play Store to challenge Google.

On Monday, Paytm launched “Mini App Store” for Indian developers. The digital platform company says Mini app store will combine the open source technologies like HTML and Javascript. It will give access to 150 million monthly active users of Paytm app. On the website of Paytm, you can see some of the apps are already listed like Netmeds, Dainik Bhaskar, Digit, Decathlon, 1MG, and Republic Bharat.

As per the reports, there will be more than 300 apps on the Mini App store. Paytm is providing the list of these apps within its app for free. The developers can choose Paytm Payments Bank, UPI, net banking, Paytm wallet and card payments to the users.

There will be Mini apps available in the Mini app store, which will be custom-made mobile websites. However, users will get the same experience as apps.

According to Paytm, the developers can assign their mini-app on Paytm at 0% charges. However, on credit cards, it will have 2% of charge.

In an advertisement, Paytm said,

“Mini Apps are custom-built Mobile Web apps based on open source technologies such as HTML and Javascript, offering a seamless app-like experience to your customers.”

As of now, the Mini App store is running in beta version for selected users. And it saw more than 12 million visits last month. On 8th October, Paytm is going to host a “Paytm Mini App Developer Conference”.

It was reported, that the CEO of Paytm Vijay Shekhar Sharma was working on an app to bring Indian alternative to Google Play Store. Recently, the Indian developers asked for a Play Store and App store alternative. The demand for Indian alternative became stronger after Google has kept 30% commission for in-app purchases for using the Goole’s billing system.

When you take what we earn, you don’t grow together.
You grow at our cost.
Young co’s seek tax rebates & holidays from governments. And Google takes all this money spent by Indians on other Indian’s apps to offshores.
Depriving us of our capital investments, jobs & growth. https://t.co/SUEfZuefq1

The CEO of Paytm said,

“I am proud that we are today launching something that creates an opportunity for every Indian app developer. Paytm Mini App Store empowers our young Indian developers to leverage our reach and payments to build new innovative services. For Paytm users, it will be a seamless experience that doesn’t require any separate download and enables them to use their preferred payment option.”