While Netflix and Disney are dominating the OTT streaming markets, rivals like Amazon should have a competitive edge to face off them. And it’s got one, with proven success in recent years.

As per the latest survey, Amazon is rapidly picking up in the set-up box market in recent years, with a share of 36% in Q1 2021. The success of this gain is attributed to various factors, like as below;

What started and dominated by Google in 2013 is now lost ground for itself. The Chromecast – a device that can seamlessly stream your phone’s content onto a connected TV was an instant hit when launched.

But this slowly degraded as Google failed to maintain its market position. It lost the ground to evergreen Roku and Amazon, who took over Google’s set-up box market in the last five years and left a small pie for it.

As per the latest survey from Parks Associates on the smart TV and streaming box market, Amazon’s Fire Stick TV was found growing rapidly since 2015, from a market share of 12% to 36% in Q1 2021. 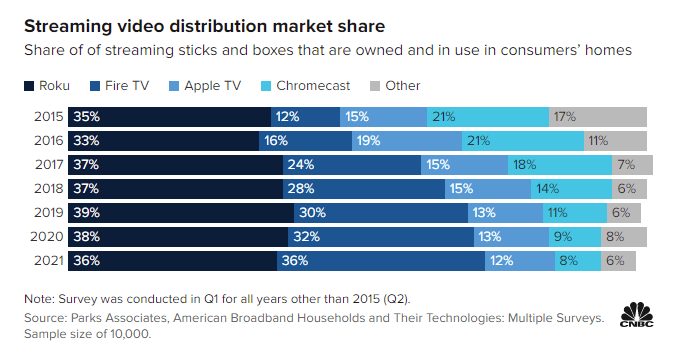 Whereas the market share of Google’s Chromecast has fallen significantly from 21% to 8% in the same period. Roku, on the other hand, maintained a stable share of around 35% since 2015.

As of Q1 2021, both Amazon and Roku with 36% respective market share stand at the top, leaving others like Apple, Google, etc have the rest. The success of Amazon here is attributed to many, with efforts on distribution and deals mostly.

Firstly, Amazon tied up with various mid-range smart TV makers to have its software pre-installed in the sets, thus going default into the hands of customers on purchase.

And, Amazon made its Fire Stick TV available for a dirt-cheap cost and on its widely used e-commerce platform, thus reaching potential customers more easily. And lastly, Amazon is cutting crucial deals with various media houses to bring engaging content via its OTT.