Amazon was granted a patent to try a new technique to detect the piracy makers in its Prime Video platform. The largest retailer is facing copyright infringement issues just as any other OTT and has now come with an old yet novel technique called “encoding identifiers into customized manifest data” to detect the source user making the duplicate content.

As Amazon expanded to streaming service, it has added its industry’s rivals’ general problems – piracy. The piracy makers are pulling any new title released on Amazon’s Prime Video to serve for free.

While many have tried reporting the pirate sites warning users, a straight path to find the pirates is yet to be found.

In that pursuit, Amazon has just come up with a new technique called “encoding identifiers into customized manifest data,” which is more like adding a watermark on the content to detect pirates. While adding watermarks isn’t new, Amazon’s way of making it is different, and hopes to give better results than those that failed earlier.

Under this new scheme, Amazon adds a unique identifier (User ID) to the content’s
customized manifest data when a user watches it. Adding it to manifest data instead of content is different, and it’s invisible to the human eye but detectable when recorded through a camera!

These specifications make it clear streaming for the user, yet giving Amazon a chance to spot the pirate user. 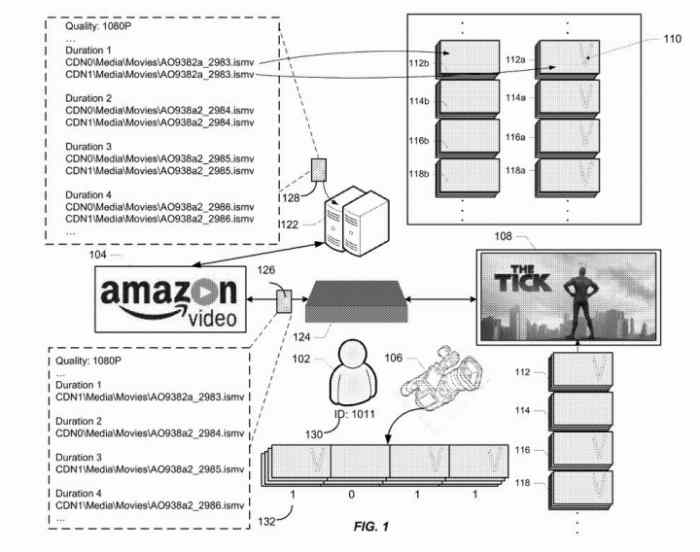 The above image depicts the flow of action of Amazon’s new plan. As TorrentFreak explained from the parent’s technical paper,

“The subscriber in question has a unique identifier (ID:1011). When this person plays the video, Amazon generates customized manifest data (126) based on this ID.

This is used as input for the Fire TV player (124), which requests video data based on the data and decodes the media server’s video fragments (122). When the subscriber records the video with an HD camera in this example, this includes a code or mark that points back to the manifest data.

However, unbeknownst to user 102, a pattern of version information 110 is encoded into at least some of the content fragments (e.g., 112-118) identified by customized manifest data 126 and is recoverable as a version pattern 132 that can identify user 102 as the source of the recorded episode.”

Making the identifier hard to detect is another clever move since it makes it hard for the pirates to remove it. Amazon also mentions that this technique works on pre-uploaded videos and live streams like the NFL.

It’s unknown whether Amazon has been using this technology already or not, but it will be interesting to see how effective this strategy is.