Just when OTT platforms are getting tough on piracy, Amazon is striking a fair balance between piracy and promotions. This settlement now will satisfy both the users and the OTT platform.

This is by letting Prime Video users share a short 30-second clip to various social media platforms, from select shows and movies. This is being offered to iOS users now and may come to Android later. Also, more shows could be added to the list too.

We often see users recording the screen or capturing a video with another device to make a copy of it, and share it with others to show their interest. As the extreme case of such is turning into piracy making, OTT platforms are barring users from doing that with various tools.

But, users still find some way to get through. And letting them share their favorite clip of a show isn’t that bad either. So, Amazon is striking a balance between these two by offering a dedicated Share experience in the Prime Video platform.

As per its recent blog post, Amazon said it’s adding a Share button in the Prime Video, where users can share a 30-second clip of select shows or movies to other social platforms instantly. This is easy and lets you tune a 30-second clip of wherever you want in the show you’re watching. 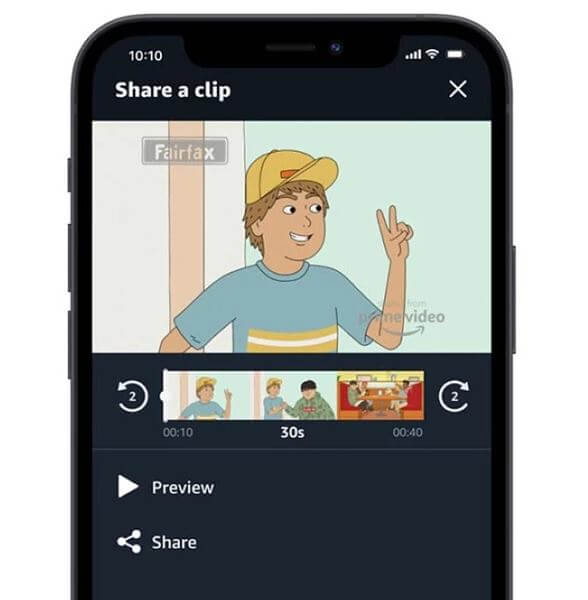 Just pause the video where you wanted to share it, a clip of 30 seconds will be trimmed automatically by Amazon, with tools to move backward or forward to select the desired clip. And when done, hit the Share button at the bottom to see available social media platforms. Select one and share.

This feature is currently available in the iOS app of Prime Video and may come to Android later. Also, Amazon may add more shows to the supported content list.