Guys at 9to5Google have managed to find a long touted wallpaper dimming feature in Android 13, where it will dim the wallpaper background to ease your eyes at nighttime use.

This feature is a part of the Bedtime Mode in Digital Wellbeing settings, where users will be allowed to set dimness at several levels, including a full dark background. More details on this feature are yet to be known.

Even after decreasing the screen brightness to 0%, some people often look for third-party apps to dim the screen light even more. Observing that, Google is said to be working on a native feature to let users dim their wallpaper on the home screen, to ease their eyes while using the device at night.

While it’s been a long time, we now have the images of what this feature would look like. This support was found in the Bedtime Mode of Digital Wellbeing app settings, by 9to5Google guys who crack open the APK file. 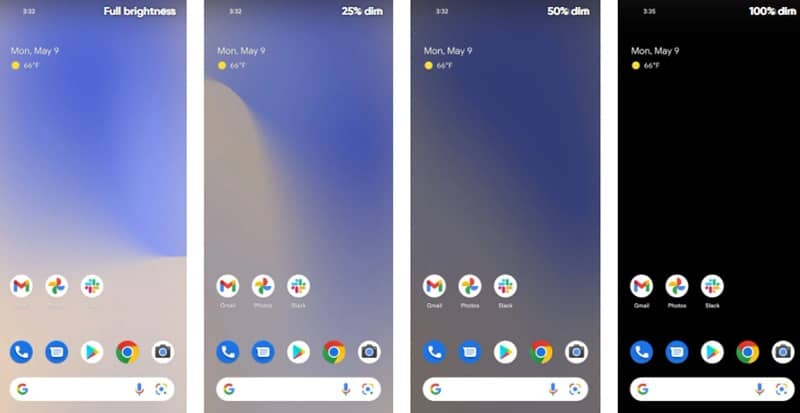 As per their findings, this feature is won’t be a mandatory element of the Bedtime Mode, so it’s upto users who can decide to turn it on or not. Also, there are options for dimming the wallpaper to 25%, 50%, and 100% brightness.

While the 25% and 50% are fair with wallpaper being still visible, a 100% setting will turn the wallpaper dark with only app icons being visible. Well, it’s unclear if the feature will activate at a particular time, or follow a set routine to dim the wallpaper.

This is an addition to the newly added features of Do Not Disturb mode on a schedule and disabling your phone’s always-on display during certain hours in the Digital Wellbeing app.