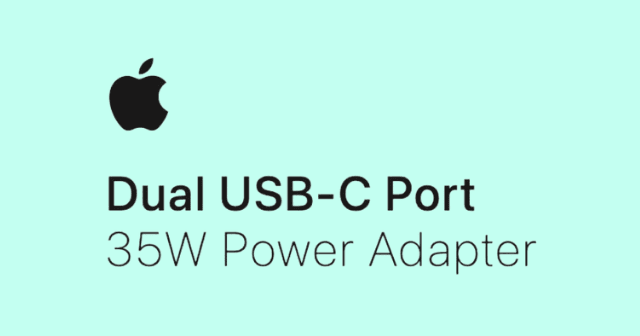 Apple is reportedly making a 35W Dual USB-C Port Power Adapter, that will let its users charge up to two Apple devices at once.

Brief detail on this product was released by Apple accidentally and soon removed. But the document that’s published, says a USB-C cable can be connected to either of the ports of the 35W power adaptor and charge the device at its fast charging rate. This may use the GaN technology, as it’s feasible to step up now.

Charging technology for smartphones has come a long way. We’ve grown from fast charging to wireless and now reverse wireless charging too. As we expand the scope of innovation in this industry, a multi-port adapter is something that’s helpful to today’s users who handle multiple devices simultaneously.

These Android OEMs have made relevant products to support them, helping them charge multiple supported devices at once. And now, Apple seems to jump in the same boat with a new 35W Dual USB-C Port Power Adapter.

The company accidentally published a paper on its website regarding this gadget and soon removed it. But as 9to5Mac noticed, it mentioned a briefing on a Dual USB-C Port Power Adapter, capable of 35W fast charging support. Apple as per the published report;

Users having an iPhone 13 Pro Max (capable of charging at speed of 27W) can use this new adapter to charge alongside powering an Apple Watch too (series 7 can charge at 5W). And it’s then the responsibility of the Power Adapter to suffice and supply an adequate amount of power to both the devices.

More details include the adapter’s input and output information;

Though Apple didn’t mention it in the document, experts believe that the new adapter could be working on GaN technology – a smaller and faster technology in the USB-C lineup that’s being supplied to the MacBook lineup currently. Also, Apple sells this separately for iPhones.