As the internet world is emerging, there must be a few things you want to share with your friends and family. A screenshot is the best way to show these things, such as memes and funny things.

In Android, you can take a Snap by pressing the volume down and power button simultaneously. But what if you got the best screenshot apps for Android? You can do a lot of things. Capturing a Screen and sending them Is not enough. Sometimes we want to edit them by cropping and putting on stickers.

With a simple android screenshot, you can’t do various things. Suppose you are watching the video and want to create a meme from some moment. You can’t do it with the built-in feature of the screen capture in Android.

However, with the help of these apps, you can make different changes to that screenshot. You can also download their apk files to install directly because some apps are not currently available on the play store.

We searched and found the best android apps for taking a screenshot with various features offered. You can do everything with that image without capturing a screen with any editing app. So let’s check what we got for you. 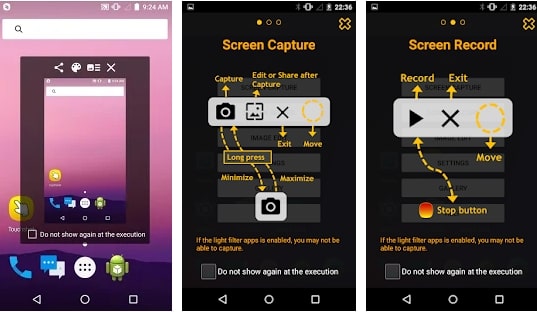 Now, this app provides numerous options for taking a screenshot. You don’t have to press any key to capture a screen. You can take it by touching the screen. While capturing a screenshot, you will get an additional feature, i.e., screenshot quality.

You can set the image quality in the app, which helps you maintain the image’s quality. You will also get the help option here, which will guide you in using the app. 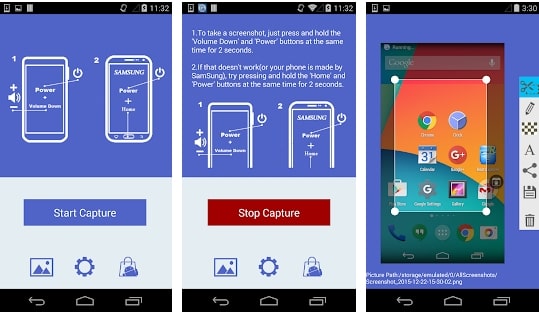 Are you looking for a decent app to take screenshots without any problem? Then will this app help? You will get various features that will be easy to use. You have to press the buttons for 2 seconds to take the screenshot.

The new feature, i.e., resizing the screenshot, you will get here. You can save all your screenshot to an sd card also, which help to maintain storage. 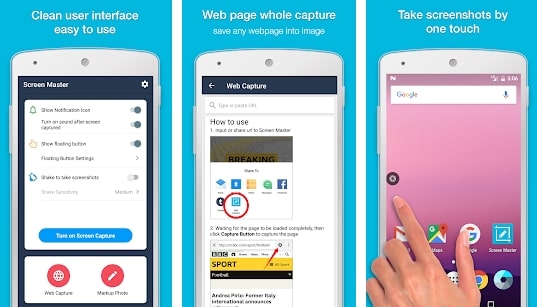 We can say this app in advance of the super shot app we saw above. The app is straightforward to use and doesn’t need any root permission. The app is free to use.

You can use all its features for free. Along with resizing, you will get additional features like drawing and putting stickers in this app. You can even capture the whole page through this app. 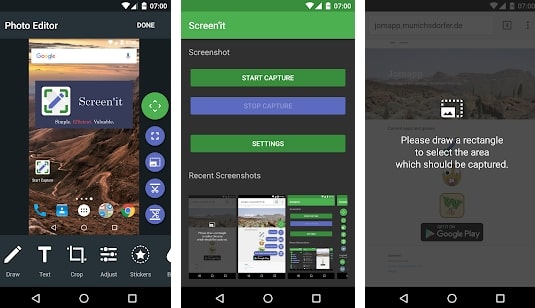 Screenit app is for normal users whose main aim is to take a high-quality screenshots. But you will also get various features here. Well, screenit is selected as a useful app for Android to take screenshots.

It includes features like fast crop, color effects, stickers, frames, and overlays, making your screenshot more advanced. You can even draw and write text on a screenshot with this app’s help. 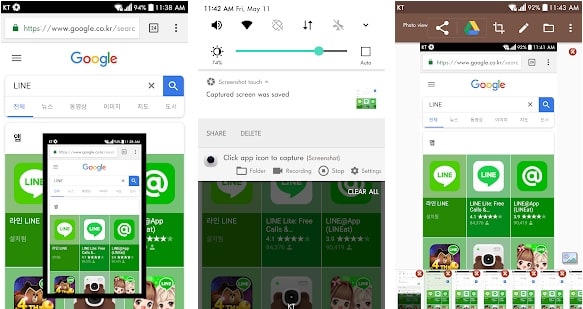 You can easily capture the screenshot by shaking the device, overlay icon, and notification. You can do screen recording, too, with the help of this app.

You will get a scroll feature here, letting you take a full-page screenshot. The best feature of this app is it will allow you to create a subfolder, and you can save a screenshot in that. 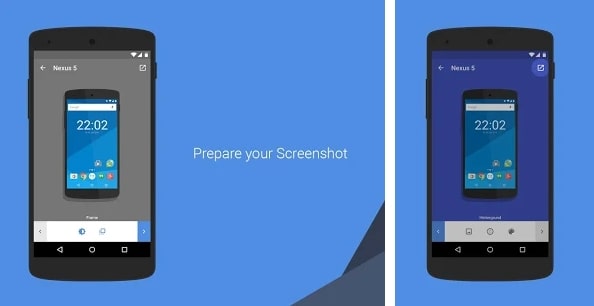 This app will help you take your screenshot to the next level with various features offered by the app. You can add backgrounds to your screenshot and even multiple effects without using any other app.

We can consider this app the best android app for taking a screenshot. The interface of this app is user-friendly. You can do a lot of things to the background of the screenshot.

You can take a screenshot with the help of this app in three ways. First, with buttons or from the notification bar, you will get the option or shake the device. You will get various image filters here, which will enhance your screenshot. 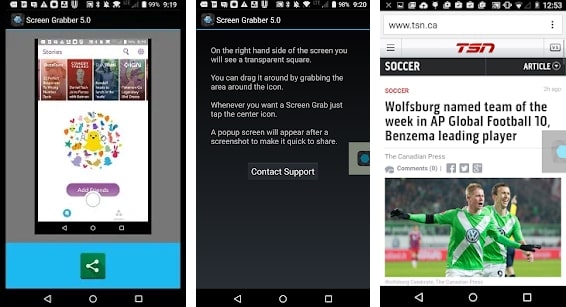 This app will provide you with the fastest and most straightforward way to take screenshots. The best thing is you can take a screenshot secretly so no one will be able to know that you took the screenshot.

You have to tap on the screen, and you are done. You will not even get a single notification about it. The app is free to use, and you can edit your screenshot in other apps too. 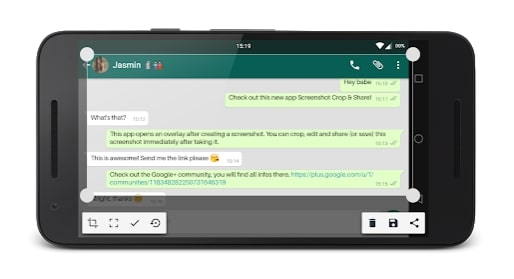 This app is for influential users whose main aim is to take a screenshot and do plenty of things with them.

You will get a unique feature that blurs the screenshot’s secret part, which you don’t want to show. Along with it, you can share your screenshot directly with your friends. 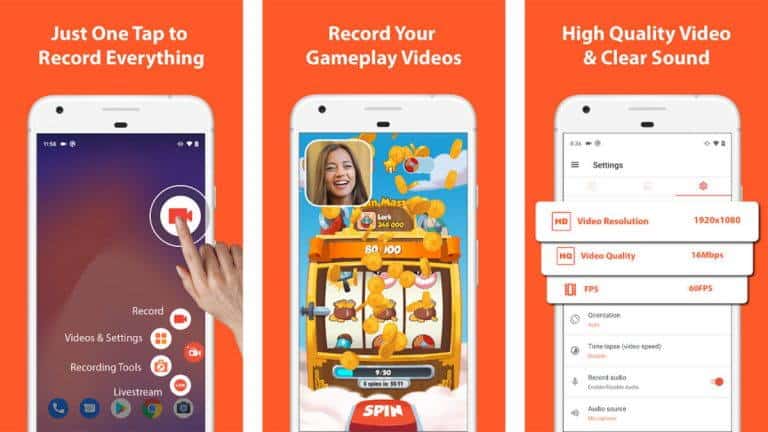 As the name says, this is primarily a screen recorder app for Android. You can record the activities on your phone screen and save them as a video. However, it also features a screen capture option too. And most importantly, it doesn’t demand a rooted device.

So you can take high-quality screenshots on your device easily. It also fulfills the criteria of a two-in-one Android application, as you can screen record high-quality videos up to 1080p without any time limit. 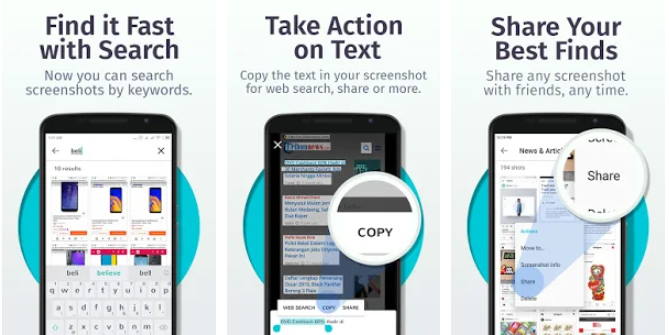 Firefox ScreenshotGo makes most of your work easier through its amazing features. Capturing a snap of your phone screen is easy, as you normally do with other apps. It features a GO button floating over every screen and lets you take screenshots whenever you need one.

Additionally, it allows you to organize your screenshots the way you wish. So, the next time you need any of them, you don’t need to keep scrolling everywhere. It even has a feature to extract text from screenshots as well.