BitTorrent Database, a similar platform like The Pirate Bay that shares copyrighted material for free, has just lost its major domain. BTDB.io is the major domain of BitTorrent’s Database site. It was now pulled down citing serverHold status, which was set by its registry, Njalla. While the operators say they’re working on bringing back the popular domain, the site is still accessible from its BTDB.eu domain.

Pirate sites are often hit with several infringement causes. While this site, BTDB.io may not be so popular as RARBG or The Pirate Bay, it’s accessed by over seven million people every month, which is a fair score. And now, the takedown of this site without any warning has shocked the operators. And when examined in WHOIS checkup, the Domain Status section of its record showed something like server hold. 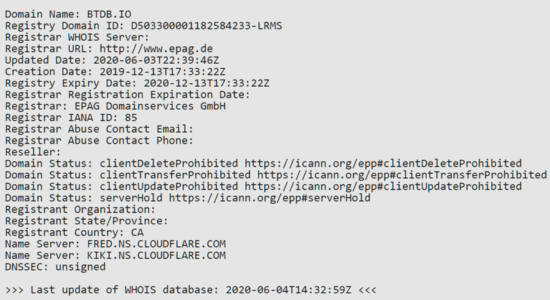 This was taken up to their registry, Njalla, a domain privacy company. Surprisingly, neither the domain operators nor the registry was informed of that takedown. And when debugged into ICANN records, serverHold status is something which is placed on a few websites, that strangles with “legal disputes, non-payment, or when a domain is subject to deletion.”

Thus, this gives us an idea of what could happen in the background. It might be the action of authorities acting on complaints from accusers. A report from Google said that it received DMCA notices targeting 235,806 URLs from 1,387 copyright holders against BTDB site, strengthening our belief. While the actual was still unknown, Njalla offered to help find out the concerned issue.

The BTDB.io has over 27.6 million torrents, categorized in movies, Anime, music, games, etc. While it started as a search engine for Database Hast Table, it now lets users upload content and share. As of now, the site is still functional from its original domain, BTDB.eu.