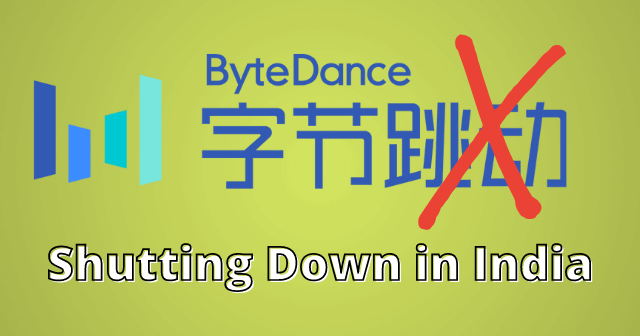 ByteDance, the maker of TikTok is reportedly shutting down its edtech business in India. While there’s no official announcement on this yet, few sources said that the company informed this decision internally.

Snapsolve is the edtech wing of ByteDance, which has over three dozen employees in India. The platform helps students from class 6th to 12th in solving Math problems.

The Chinese tech startup – ByteDance has already taken a huge blow last year with TikTok’s ban in India. Though it’s thriving in other nations, the Indian ban made a significant impact as it slashed hundreds of millions of users in one of the most lucrative countries.

Also Read- How to Download TikTok Videos Without Watermark?

Now, ByteDance is stepping down from another business in India – Snapsolve. As per reports, the Chinese tech company will wind up its operations in India soon. One of the sources confirmed to TechCrunch that, this news was internally circulated among the employees on Monday.

Snapsolve is an edtech platform that works similar to Photomath, a scanner for capturing a mathematical problem and finding the solution instantly. This is aimed at students from 6th to 12th, with problems based on not just Maths, but also Physics, Chemistry, and Biology in both Hindi and English languages.

The decision to shut down Snapsolve comes after weeks of discussion internally, which also included the thought of migrating the Indian team to work with European parallels. Though it’s performing below par levels, ByteDance was seen hiring people for Snapsolve till last month.

Alongside Snapsolve, ByteDance has another platform – Resso – a music streaming service running in India with a low-key profile, even after TikTok’s ban.