As much as investors are playing with Dogecoin, scammers play with unsuspecting investors under almost every Elon Musk’s tweet. The latest one in this series is the impersonation of Tesla and hosting a fake giveaway scam. While giveaway scams aren’t new, scammers here are doing it more authentically to fool investors. Here’s how;

Elon Musk asked his followers through a Twitter poll whether they wanted Tesla to accept Dogecoin as a payment. This isn’t surprising, as Tesla started similarly accepting Bitcoin earlier. But, fans are swayed as many reacted with memes under the poll. Also, the price of Dogecoin has increased a bit, but not as everyone expected it.

Do you want Tesla to accept Doge?

Whatever, scammers (1, 2) are happy, though. Many accounts with a Twitter verified badge are commenting with a giveaway contest, right under Musk’s poll. And the name they’re impersonating is Tesla – Elon Musk’s own EV company. Their campaign is simple to detect, as they ask people to send cryptos to an unknown wallet initially so that they can receive multiples of their deposits in return. 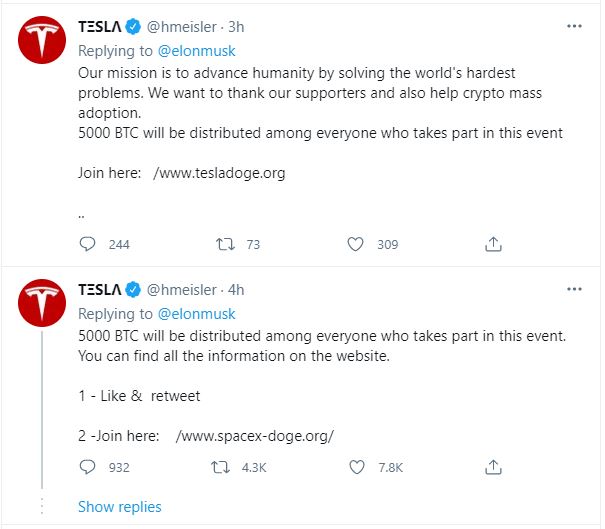 We’ve seen a similar Twitter scam happened last year on a wide scale, by a kid hacking Twitter accounts of popular personalities and luring users into depositing their cryptocurrencies. Now, several accounts with thousands of followers and a verified Twitter badge are changing their name to Tesla and luring unsuspecting people into this trap.

Filtering out, all scam accounts are directing users to one website (dogetesla.org) and asking them to follow the instructions to earn their rewards. When checked through the Whois, the website isn’t even a day old but is now drawing several people towards the scam. Visiting it, people can choose any contest between Bitcoin or Ethereum, or Dogecoin to participate in. They should be depositing their balances into the said address and waiting to receive more in return.

And as expected, it’s just a scam! Anyone who deposited anything into it won’t likely receive anything. This has been proven in the past, too, as a batch of scammers has already exploited people with the fake SNL giveaway scam. And now, with the name of Tesla. Scammers here make this campaign authentic by disclosing the wallet transactions, but they aren’t verified.

It could most likely be the wallets of scammers, who transfer coins among them to make people believe the scam is working. So to those who have fallen for this, cry! And the one’s suspecting the campaign, stay aware as you are now.