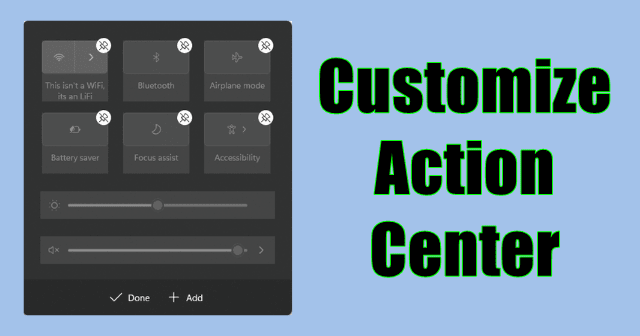 Windows 11 has got a completely redesigned UI in many ways, including the Action Center, which houses a plethora of quick toggles like WiFi, Bluetooth, Accessibility, Airplane mode, and so on. In addition, Microsoft has revamped UI, which now looks flamboyant and streamlined than before.

This includes notifications that PC gets, which is quite intuitive. In addition, action Center on Windows 11 arrives with a tonne of toggles that you can customize according to your needs and here’s how you can do it.

Also Read- How To Get Moving Live Wallpaper in Windows PC

How To Customize Action Center Shortcuts on Windows 11 PC/Laptop

Here’s how you can do it.

Steps to Remove an Entry from Windows 11 Action Center

Here’s how you can remove an entry on Action Center on Windows 11.

Windows 11 gives you a lot of personalization features and transparency on Action Center is one of them. So let’s see how you can customize its transparency.

This is all you need to know about customizing Action Center on Windows 11 PC. Using the instructions mentioned above, you can add a new entry, remove an existing one, and re-order if you want. Windows 11 will keep updating itself with new features, so you will see more features and customization options along the way.