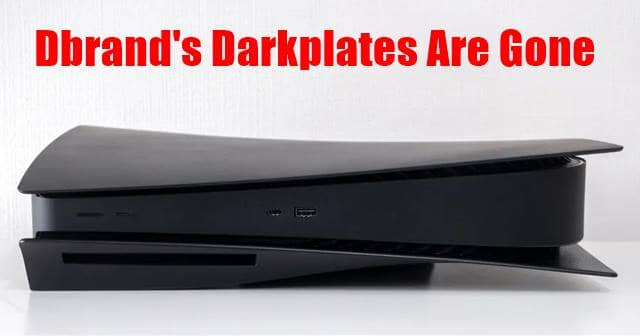 Earlier this year when Dbrand released customized sideplates for PlayStation 5, it dared Sony to sue them for that.

And the time has come, as Dbrand removed its so-called Darkplates from the store as it received a cease and desist order from Sony to do so. Though Dbrand pulled them off accordingly, it seems to have other ideas as mentioned in a specific company’s post.

As Sony made removing the sideplates of PlayStation 5 easy, even demonstrated how to do it, many grew intrest in replacing them with third-party creative sideplates. And there’s a big market for this too! But, Sony is watching carefully on how these third-party OEMs are making them.

And if found anything questionable, it enforces a lawsuit to tune them accordingly, just like it did with PlateStation5, a PS5 sideplate maker that was later forced to change its name to CustomizeMyPlates, and cancel/refund all the orders made.

Now, it preyed on Dbrand, a famous and creative maker of smartphone cases and panels that has announced a custom-made PlayStation 5 sideplates earlier this year. They’re named “Darkplates“, are matte-black in color, and sold from $49-70 as per customization.

When announced in January, Dbrand even challenged Sony to sue them on these! Well, the time has come, as Dbrand was forced to remove all its Darkplates from the store, complying with a cease and desist order from Sony as expected.

Sony mentioned that Dbrand’s Darkplates “replicate SIE’s [Sony Interactive Entertainment] protected product design“. While Dbrand complied as asked, it seems to have other plans, as the company went on to abuse Sony for its actions in a 1666-word subreddit, and hints at coming back with something else.