Monitoring the performance of your PC while using any performance-intensive programs or games is very important in determining the PC’s capability. Because you can change particular settings to get an optimal performance or else upgrade your PC components. Till now, we have been using Task Manager or other tools like the MSI afterburner to do them.

Taskmanager uses some amount of resources for itself to monitor the performance. Since you need it to run in the background. Also, there is no option to monitor FPS in-game. But wait, there is a built-in option within Windows 10 that you use without the need to install any other apps.

Though the monitoring tool is kind of hidden, so, in this article, we are going to explain how to enable and use this feature to monitor the performance of your PC in realtime.

Steps to Enable the Hidden Performance Monitor Panel in Windows 10?

Yes, the option is hidden within this XBOX Game bar. You might have seen this already. Most people don’t even use it.

However, some people use this feature to get access to XBOX services and capture screenshots or record gameplay. But with the latest version of the app, Microsoft included a performance monitor widget along with a couple of other useful tools. 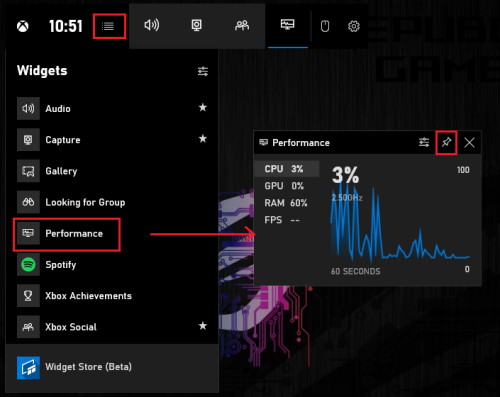 That’s it, and you can use the Performance monitor to monitor the performance of your PC. There are other features such as Audio control, screen capture an

Although to use this feature, your PC has to meet specific requirements. Else the feature won’t work as you expect it to. Here is the requirement you should see: 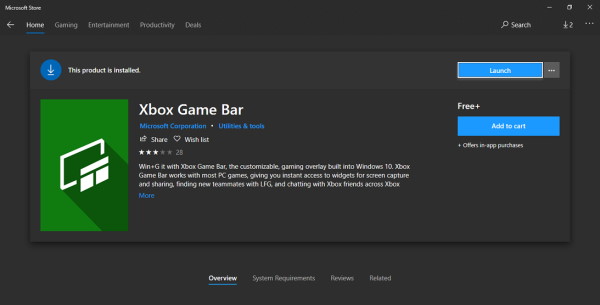 Note: If you have used any De-bloating scripts, there is a chance the app got removed by it. Even on light edition windows 10 (Unofficial builds), the feature will be removed.  In such a case, you can simply visit the Microsoft store and reinstall the XBOX game bar by clicking here.

Sometimes, the tool won’t work if you are using older hardware or integrated GPU. For some reason, the tool could not show me GPU usage on my laptop that uses i-GPU; even the task manager won’t show it.

Also Read: How to View Hidden Files and Folders on Android Device?

To show FPS, you have to enable UAC permissions for the tool. You can revoke that by going into the FPS tab and clicking on request access.

But you should restart your PC for the change to take place. Although if you just want to measure FPS, then Fraps is a perfect tool exclusively for that. 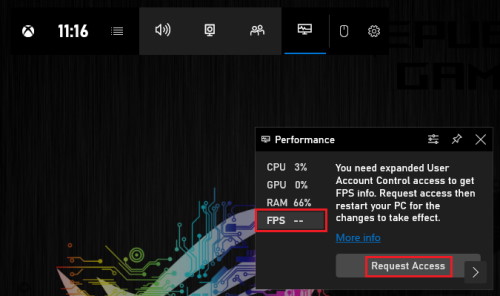 So for having a quick look at the performance, this tool could be useful. Although for getting more info, it is recommended using tools like MSI afterburner or such tools.

They provide detailed usage of CPU (all cores), RAM, and GPU usage. But its worth to give this built-in tool a shot, since this could simply be activated by pressing Windows key+G! Need more info and support? Simply visit this support page regarding FPS related issues in the game bar.