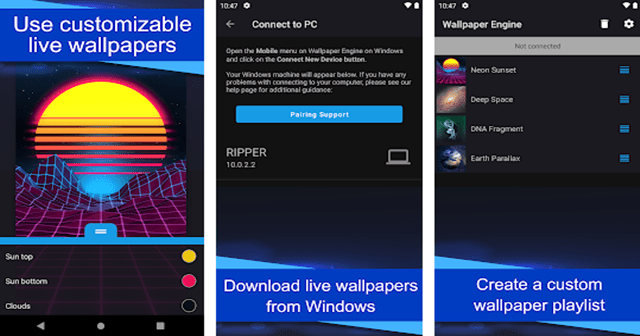 As announced in September this year, the makers of Wallpaper Engine have shown up with an Android version of their service.

The new Android app of Wallpaper Engine can import your library from the PC version and have them run on the handset. Though the app is free, more features can be availed through link-up with a PC client, a paid software. Yet, it’s excellent and worth trying. Here’s why;

Wallpapers play an essential role in our everyday mood. Set a refreshing or thought-provoking wallpaper to light up your situation instantly, and have a good day running. Understanding this, a group of experts has made wallpaper software that offers users various options to make their wallpaper.

And it’s called Wallpaper Engine – a wallpaper maker primarily made for PC clients but now adds an Android variant to its arsenal. The team behind it revealed working on it for so long and now came up with one finally. The Wallpaper Engine for Android comes with WE v2.0, which adds new features like 3D depth effect, new logo, etc.

The Android version is free to use but needs to pair up with the PC counterpart for better results in most cases. And it’s paid software there! Well, you can at least connect them to import all your library from the Wallpaper Engine PC version and have them run on your handset.

Else, you can use your local content like videos, GIFs, or images to set them as wallpapers. You can further customize things with several tools and make them better. The Android version supports Android 12’s dynamic wallpapers and Material You theme.

Some notable features in the Android app include;

There are no ads or hidden costs for using the Android app. So install here for trying it.