Google is adding support for multiple Chrome instances on Android, as it’s seen submitting code for this feature in its future versions.

With this, users can open upto 5 windows of Chrome and have unlimited tabs in each of them. Moreover, they can manage windows easily and switch between them through the device’s recent apps. To experience this, the user’s device should run on Android 12 and Chrome’s latest version.

Multiple Windows of Chrome on Android

The Chrome browser is one of the most loved browsers in the tech community because of its flexibility. Google is adding many features regularly to improve the user experience and let users tweak it as they want.

In this case, Google is bringing multi-instance support for Chrome on Android, as seen through its latest code changes. As per the newly modified code in Chromium Gerrit, Google added the “New window” button to Chrome when switched to split-screen mode.

Tapping on it will open a new window of Chrome, with a new option added to the menu as the “Manage windows” button. This will list out all the available windows of Chrome that you’ve opened, with details of several tabs included in them. 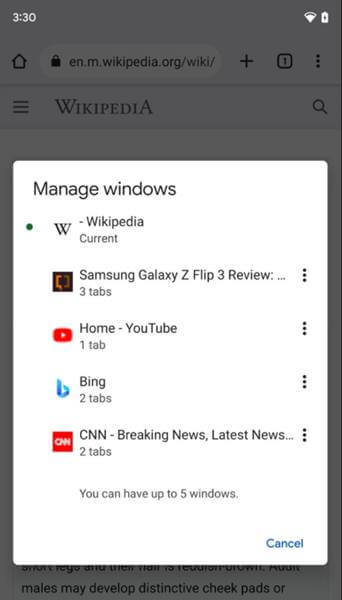 You can open upto 5 Chrome windows and unlimited tabs in each of them. These will be stored in Chrome’s SharedPreferences, thus making the windows persist through a reboot. This feature was available in Chrome on the desktop for a long and now comes to the Android version.

Although, you need to be running on Android 12 and Chrome’s latest version to experience this feature. But if you’re not on Android 12 and still wanted to try, open any website in Chrome in split-screen mode, navigate to the context menu, and select “Move to other window.”

This should open a new Chrome window and none further. Moreover, all the tabs you’ve opened will be merged into a single-window exiting the split-screen mode. In stable rollout, you can also switch between windows from the recent apps section, like apps.