To date, Google allowed third-party apps to customize the Sharesheet UI accordingly. Or the device OEMs used to craft their own UI for sharing things. This will change, as Google will be blocking the customization options to third-party apps in Android 12. This was revealed by XDA developers, who tried changing the Sharesheet UI and got blocked in the latest Android OS.

Uniform Sharesheet UI Across All Apps

While Google pledged to make the Android 12 more flexible than its predecessors, it’s blocking some customization options like the Sharesheet UI. Sharesheet is the panel of options where you’d see all the available apps for sharing your content. 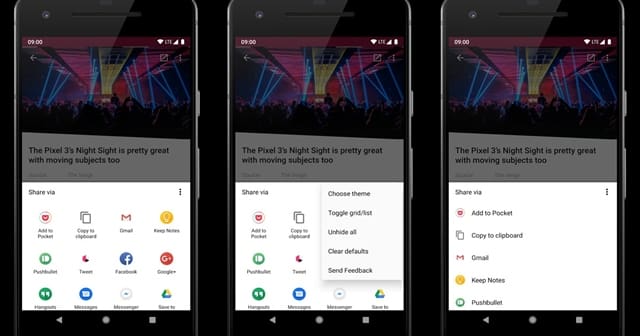 For example, sending/sharing any photo or video from your Photos app will a popup sharing window with available apps, and this panel is called the Sharesheet. As reported by XDA developers, Google doesn’t let third-party apps alter the Sharesheet UI, where most of the device OEMs do accordingly.

Previously, users who wanted to have a uniform Sharesheet UI had to install a third-party app like Sharedr, which maintains the same panel design across all apps in the device. But now, with the launch of Android 12, Google aims to block this customization as it tends to put its native Sharesheet UI for all apps.

XDA developers who tried sharing content through Sharedr didn’t have the option to show up. But, they were given the default option of sharing through Android Sharesheet UI. This revealed that Google decides to block the third-party apps access to Sharesheet UI, contrary to the announcements it made on the launch of Android 12, where it spoke supportively of deep customization.