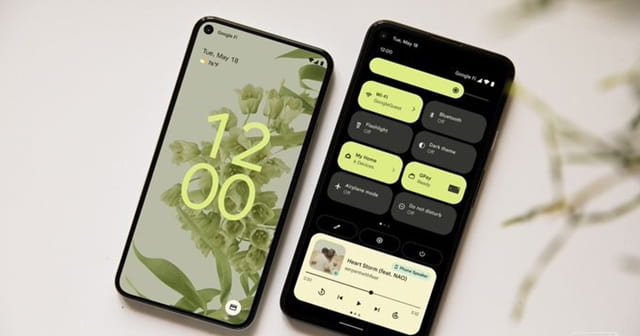 After all the leaks for months, Google has finally announced the Android 12 Beta 1 yesterday in its Google I/O event. While we can’t expect much from the first beta itself, there are many design changes made to the new Android iteration. From settings to notification panel and animations, the UI has been revamped. Functional features are excepted to arrive in the next beta versions.

The Android 12 has the biggest UI overhaul since Android 5, and it’s mostly true. As revealed by Adam Conway from XDA developers, who tried the latest Android Beta on Pixel 5 handset, the UI on Android 12 is refreshed in many areas. The digital time is made huge and set right at the center, starting from the lock screen.

Going in, the notification panel sees a lot of improvement with the icons made bigger and in rounded rectangular shapes. The brightness bar is now a hollow one, and the quick setting icons reduce accordingly to equip the new functions into the notification panel. This could be the music player and other handling settings.

Google says that functions to handle your smart home appliances and Google Pay shortcuts will be added to the notification panel in the next beta updates. Next is the settings app, which has its own tuning made. There’s a bouncing effect added in the settings app, where you can see the slight bounce type movement when you reached the bottom.

As scrolling through settings is made fun, so do the changes within most settings. The design for pattern and passcode locks is changed to be simple and more clear. Next, a new volume control slider, which pops up after triggering the volume button at the side, has a new animation of switching between options like vibrate, ring, and DND mode.

The dark mode was tuned to be more greyish now, which is not so comfortable in the Android 12. I hope Google passes an option to make it darker. But, there’s a new option for reducing the screen brightness deeply (more than the actual limit) in the settings.
All this design overhaul is a part of the Material You, which Google says tuned according to users (you).

Apart from these design changes, few functional features like app hibernation, the ability to activate the Google Assistant with the power button, and not allowing the precise location to be collected by the apps have been added. While this Beta 1 is just a design update, more features are expected to be rolled out in the next Beta versions, as per Google.