TechDator
Home News Google’s New Feature May Not Require You to Say ‘Hey, Google’ For...

It’s true that Google’s Voice Assistant made our life easier, but only a bit. The main catch in using this handsfree tool is we still need to wake it up by calling as Hey, Google, or Ok, Google and then proceed with our command. But, this could be changing soon as reports found a new internal Voice Shortcuts feature, that may cut this hassle. While no information on this is available yet, we may learn more about it soon.

One of the critical elements in today’s handsets to call themselves smartphones is the voice assistant, which is made available by Google on all Android phones. Thus, any Android smartphone user can use the Google Voice Assistant to make petty things happen, like setting an alarm, calling a contact, sending a text message, or opening an app.

While using the Google voice assistant for performing these functions handsfree is fun, it’s still a hassle sometimes. You should be activating the voice assistant by saying Hey, Google or OK, Google or do it manually to proceed, which is daunting for performing simple tasks like stopping an alarm. But, this could be changing soon, as per reports from XDA developers. 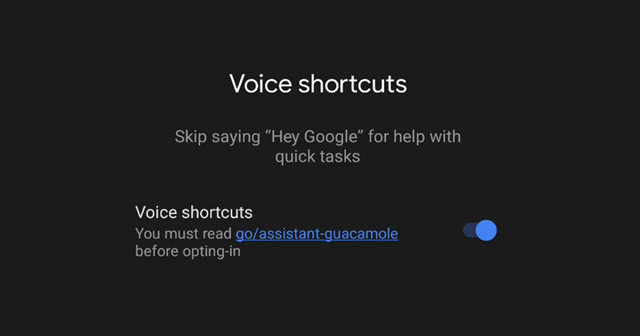 XDA group has seen a new feature called Voice Shortcuts, which claims to cut the activating phrases for doing tasks. This project is termed Guacamole and isn’t activated yet. Toggling the key does nothing visiting the mentioned URL for learning more is broken. Thus, we know nothing much about this support yet and hope to learn more.

Google may unveil this function in this year’s I/O conference, which is made virtual and free for everyone due to COVID-19. Thus, we’re excited to see what it can do.