While we often hear Windows being attacked frequently, it’s the Linux, Android and even MacOS that are more vulnerable to attacks. Recent research revealed the number of vulnerabilities possessed by each operating system, where Linux and its distribution Debian, Android topped the charts. These are having 2,000+ vulnerabilities for two decades, yet believed better than Windows today.

A report by the National Institute of Standards and Technology’s National Vulnerability Database showed eye-opening results of vulnerable softwares. A two-decade survey from 1999 to 2019 showed the OS with most vulnerabilities as Debian (3,067), a Linux distribution. This was followed by Android (2,563), Linux Kernal (2,357) and MacOS X (2,212). However, Windows Server 2008 and Windows 7 are in the top 10. Windows 10 too has around 1,111 vulnerabilities recorded. 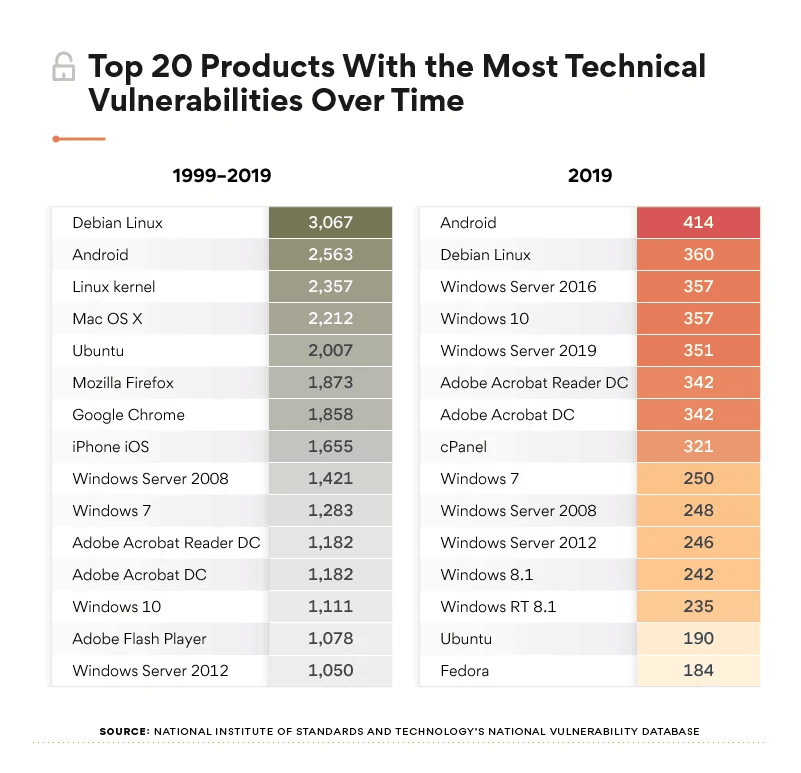 This cannot be a fair comparison, as Debian and Linux were in existence since the 1990s, but Windows 7 and version 10 were introduced in 2007 and 2015 respectively, letting them have low count vulnerabilities due to being the latest. Although, another fresh report for the year 2019 cleared it all.

The charts of 2019 alone have Android (414) in the top, followed by Debian Linux (360), Windows Server 2016 (357) and Windows 10 (357) in the next positions. Interestingly, Adobe’s Acrobat and Flash Player too were listed in records for having vulnerabilities. The cPanel (321) which was used by most WordPress publishers has a spot too.

Other researches as most vulnerable vendors have Microsoft as a top, with 12.9 vulnerabilities per product. Though Linux (139) and Google (54) are having more vulnerabilities, they tend to offer fewer products than Microsoft.

Though Windows seemed safe than others, it’s just the OS. Microsoft is having a number of products like Office 365, browsers, etc which need Windows to be running and could add up the vulnerability count. Further, as Windows is having the larger market share, they’re actively targeted for wider explorations.