Linux, the operating system known to many is surprisingly powering more than 85% of the world’s smartphones today. This is revealed by International Data Corporation, which released the number of smartphones shipped in Q4 2020, and determined that about 86% are Android handsets. And since they’re all run on Linux kernel, it’s called their powerhouse.

Mobile software is something that everyone considers while buying a smartphone today. While OEMs pack various features into their in-house made OS, there has to be something that powers them all. And here enter the kernel source codes that hold together all the forks made out of them. 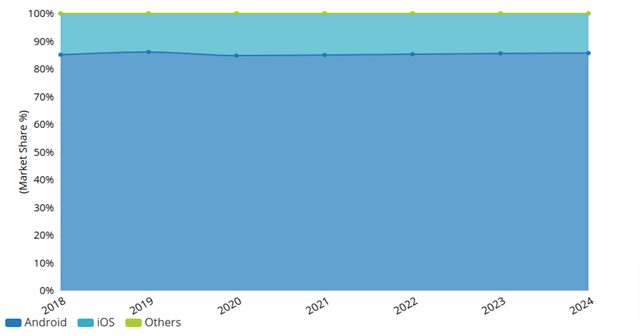 For example, Google develops Android and uses the Linux kernel as the powerhouse. Then there’s Apple, which uses XNU, a Unix-like kernel that powers iOS. And as per the latest statistics from International Data Corporation (IDC), about 261.1 million smartphones shipped in the last quarter of 2020. Out of them, 85% of handsets are determined to be based on Android, which means eventually on Linux kernel. This shows how important Linux is, which is always being mocked for not be user-friendly.

Also, the reports from Statista and Gartner reveal the market share of Android, standing at 86%. This determines that over 85% of the world’s smartphones are now running on the Linux kernel. Also, there are few vendors trying to bring the Linux OS onto mainstream by making a handset that’s completely powered by Linux.

There are phones which already run on this concept, like Ubuntu Touch, Librem 5, Pinephone, F(x)tec Pro1, Plasma Mobile, etc. These phones are made and marketed on the idea of providing maximum security to the users’ communications and have Linux as both core and UI.