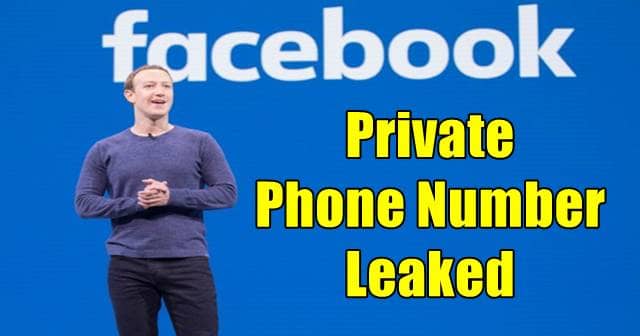 The recently surfaced open database of Facebook has Mark Zuckerberg’s personal phone number in it! This was revealed after analyzing the US dump, where he’s allocated a Facebook ID of No.4, and his full name, phone number, gender, and other details. While this could be an old one, it still has the potential to harass others.

One of the world’s richest men, Mark Zuckerberg had his personal phone number leaked in a database from his own company! The incident of Facebook data leak since the last couple of days is vital, as it contained over 553 million users’ records from various countries.

The leaked details include the name, their Facebook ID, phone number, gender, and other details like location, education, relationship status, employment, etc if provided. These details are so sensitive that, threat actors can now use this dump to perform impersonation attacks.

Also, they may try to target specific individuals with phishing pages to obtain more details like passwords, which in turn can be used for other attacks. The database was divided into several individual records based on countries. And when checked into the US database worth 32 million records, it included the personal phone number of Facebook CEO, Mark Zuckerberg.

The data was claimed to be an old one from 2019, where a hacker obtained by exploited a now-patched vulnerability in Facebook’s Add Friend feature. Though most of the records included in it are old, they’re still worth it in some way. For example, all the phone numbers may not be changed by everyone, which can give rise to phishing-related cyberattacks.