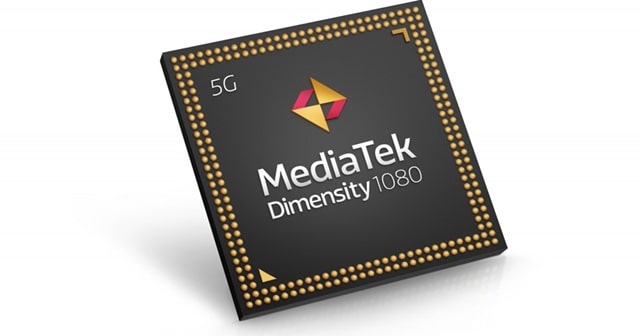 Succeeding the Dimensity 920 chip, MediaTek introduced a new one called the Dimensity 1080 – which is set to power the future flagship and budget phones from a number of vendors.

Though the new chip is mostly identical to its predecessor in terms of performance, it adds support to a better camera (200MP) and a number of advanced connectivity, like Bluetooth 5.2 and WiFi 6. Also, it boasts support for 120Hz refresh rate screens.

MediaTek is one of the sought makers of chips for budget and entry-level premium smartphones that offer decent specs without making a hole in our pockets. As with that, the company has a high-end processor name Dimensity 9000, powering ultra-premium phones.

But for budget range, it got the Dimensity 920 chip – currently running in Xiaomi Mi 11i, Realme 9 Pro Plus, and the Realme Narzo 50 Pro. Though it’s doing perfectly fine, it’s time for a new one to succeed since the 920 is already a year old.

The only difference is that 1080 has a slightly higher (100MHz) clock speed for its two bigger cores when compared to its 920 counterparts. Even the Mali-G68 MC4 GPU is the same for both! Well, since it’s a new iteration, the Dimensity 1080 is supposed to show some distinctions to get sold.

And it does, in terms of camera and connectivity support. The all-new Dimensity 1080 supports upto 200MP cameras, which is a growing trend now. The likes for the bigger camera will definitely stand as a selling point for many cameras in 2023, thus weighted.

Also, the new chip supports for 120Hz screens, Bluetooth 5.2, and Wi-Fi 6 connectivity, which are advanced and better. You can see some new-age smartphones from Xiaomi, Vivo, and Oppo housing this new Dimensity chip, and launching soon.