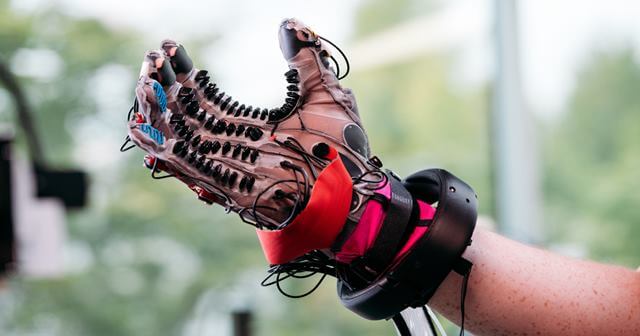 In the pursuit of making Metaverse possible, Facebook’s Reality Labs showcased a prototype of haptic gloves, which they designed for over seven years.

These gloves are fitted with sensors and various new technologies, to let users feel the sensation of holding, touching, running objects in a virtual world. While there’s a long way to go, the makers hope these haptic gloves play an important role in AR/VR world once fully developed.

Meta (formerly Facebook) is deeply focused on building the virtual world for everyone – Metaverse. The company shared a lot of details regarding this project recently and defined an AR/VR headset as the prime way to enter.

But, there’s yet another gadget that needs equal importance in accessing the virtual world Meta is aiming at. And that’s a haptic glove, which will let users feel the objects in a virtual world on par with the real-world sensations.

And Meta showcased a prototype of its haptic gloves today, after developing them for over seven years! These are made by Meta’s Reality Labs, the research and innovation wing of Facebook earlier.

As per them, these haptic gloves are equipped with a number of inflatable and plastic tiny motors called actuators, which in turn contain microfluidics to act accordingly. Based on the movements we’re performing in the virtual world, these motors will be filled with microfluidics according to inputs from sensors, and create pressure on different parts of the hand.

This way, you shall feel like holding an object in the virtual world as real as in the outside physical world. All the motors fit in are aimed at perfectly reproducing the different sensations. While this feels good and a logical way of sensing virtual objects, the gadget needs more development, says the makers.

“When we started the haptic glove project, we asked ourselves whether we could build a mass-producible, affordable consumer device that lets people experience any tangible interface anywhere.

We couldn’t do it — not without inventing new materials, new sensors and actuators, new methods of integration and systems, new rendering algorithms, new physics engines, the list goes on. It just wasn’t possible, but we’ve forged a path that is plausible and could allow us to get there.”

So, we should be waiting for a few more years until Reality Lab’s fine-tunes these gloves and breaches its goal of lessening the gap between the real and virtual world.