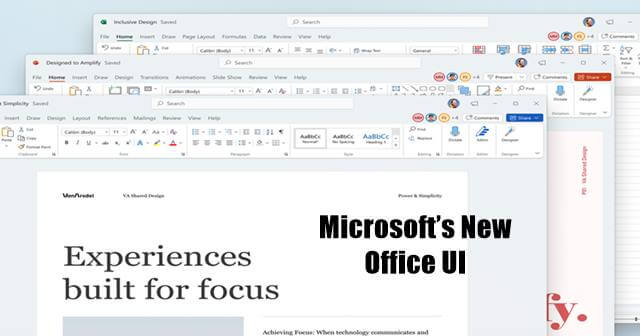 After showcasing the new Office apps designs in Windows 11 event last month, Microsoft is now rolling out the first beta to insiders to try it out.

Apps like Word, Excel, PowerPoint, and Outlook may have subtle changes within and rounded corners to match with the base, Windows 11 OS. While more changes are yet to come, interested users can try Windows 10 and Windows 11.

One of the critical elements that make users stick to Windows OS is the Office 365 productivity suite. Apps like Word, Excel, PowerPoint, Outlook, etc., are so important for one’s regular workflow, thus use them on best-suited OS like Windows OS.

As they’re significant in most lives, Microsoft decided to make some design changes in Windows 11 and be more productive and refreshing. In this pursuit, the company has unveiled a new look for this suite of apps at last month’s Windows 11 event.

While we hoped for significant changes in both design and features, these could be rolling out slowly, maybe in 1-2 years of span to the general users. But before them, Officer Insiders who have signed up for receiving beta updates can try the first look at these.

Microsoft has just rolled out the first update for Office suite to Office Insiders, with slight design and feature changes to the apps within. These include rounded corners for all the windows to align with the base OS and some icon designs.

While we thought of moving away from the ribbon interface to an adaptive command bar, that could be a long way to go. Till then, Microsoft may first try these in web and mobile clients of Office apps and then roll out to desktop versions.

Enroll in the Office Insider program and check the new update to the Office suite to try it for yourself.