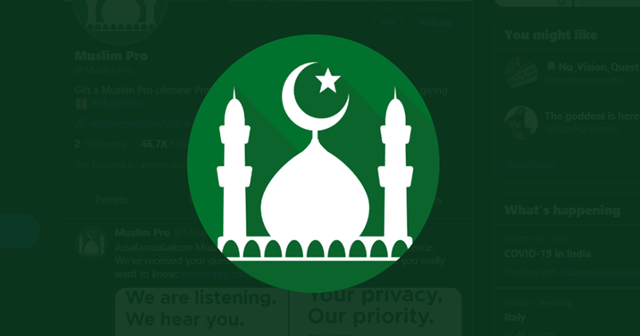 Singapore’s Personal Data Protection Commission is now investigating the case of Muslim Pro app, which was reported to have sold granular location data to a third-party, which have US military as one of their clients. The maker of this app, Bitsmedia has denied these allegations and said it shares only the anonymized data for advertising purposes.

Muslim Pro, an app for tracking the prayer times, routes to masjids, reading Quran in several languages etc, was reported to be sharing users’ granular location data with third parties. It’s having near 100 million installs in Playstore, with users worldwide. It’s now being scrutinized by Singapore’s Data Watchdog for data sharing allegations.

The investigation was confirmed by Singapore’s Personal Data Protection Commission (PDPC), saying it has asked the developer – Bitsmedia to provide more information on how their apps work. The story was initially reported by Vice Media, which claimed that Bitsmedia had shared granular location data with X-Mode, a data aggregator having US military as one of its clients.

Media reports are circulating that Muslim Pro has been selling personal data of its users to the US Military. This is INCORRECT and UNTRUE. Muslim Pro is committed to protecting and securing our users’ privacy. This is a matter we take very seriously. #MuslimPro pic.twitter.com/2Lu0Zgvso1

Bitsmedia have soon published two reports claiming that it didn’t share any granular location data as accused. Further, it justified all the app permissions it asks from its users and said it shares only the anonymized data with its selected partners.

It claimed that data being shared is not attributed to any specific user, and is having “industry-standard security arrangements and protective measures,” to safeguard user data. Yet, it announced to have terminated partnership with all its partners “effective immediately”.

It later explained that it collects and shares data for common purposes like advertising, which is its main source of revenue. At last, it affirmed that it hasn’t violated any data protection laws, and is transparent and complying with all such bodies.