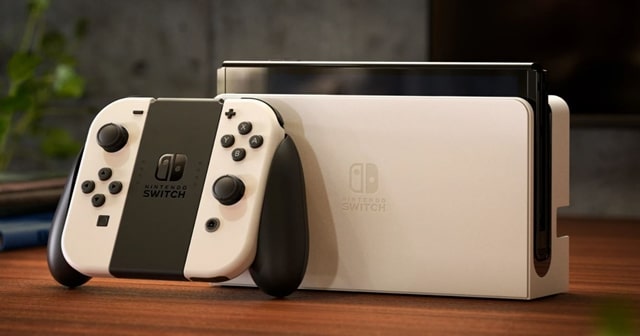 After months-long rumors about the new console, Nintendo has finally announced the next console iteration -Switch OLED with several improvements.

These include a larger screen, more internal storage, widened kickstand, slightly rounded edges for docks, and wired internet support. All these have increased the price of a new console to an additional $50 from the previous edition.

While the world only sees a console war happening between Microsoft’s Xbox and Sony’s PlayStation always, there’s Nintendo sneaking in between with its own perks and gaining fans.

The Japanese console maker has now come up with a new console – Nintendo Switch OLED – with many Improvements over the previous edition.

These include – a larger screen spanning 7″, a bump from current 6.2″ display. Increase in size means it now has a better contrast, color vividness, and maybe brightness. And since it’s now larger, it may offer a more immersive experience.

It’s unusual that Nintendo hasn’t updated the display resolution from 720p (HD), though it bumped the technology to OLED panel. We hope this is made by Samsung, and since the console it’s slightly wider now, Nintendo has trimmed the bezels to be short.

The new Switch Console has a wide kickstand now, for better tabletop positions and in more flexible viewing angles. The internal storage was bumped from 32GB to 64GB, thus making space for more games without an external SD card.

The dock on the other hand too has improvements in terms of design, with slight rounded corners at the top. Similar to the current edition, it’s available in black/white dock and the Neon Red/Neon Blue Joy-Con.

The new console supports wired Ethernet connection, which is a huge plus than the earlier edition which forces to use a USB connection with Ethernet indirectly.

While we’re wondering Nintendo didn’t mentioned anything about performance improvements, the new OLED Switch Console is priced at $349.99 and starts selling from October 8.