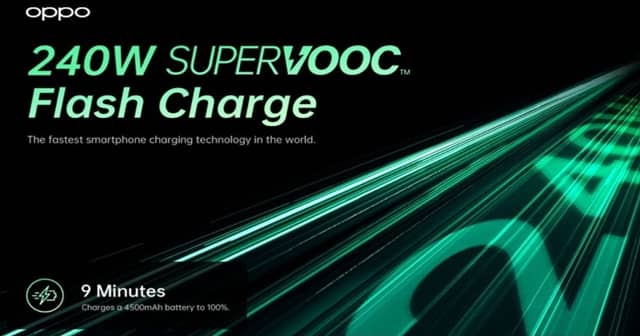 In this year’s MWC event, Oppo showed up with a 150W SuperVOOC flash charge technology, which it says can charge a phone’s battery worth 4,500mAh in just 15 minutes.

The battery, if dual celled, can get upto 50% charge in the first five minutes itself! Oppo said that the next OnePlus flagship phone would get this support when launched. Also, the Chinese company has tested a 240W fast charging tech to charge the same battery in just nine minutes!

This year’s MWC event is going to be a rollercoaster. The tech giants that shelved several innovative technologies developed in the past months are now boasting them in the grand event.

One among them, Oppo, has shown up with its new 150W fast charging technology – called the 150W SuperVOOC flash charge. The company claims to charge up a 4,500mAh battery within 15 minutes. While that’s impressive and as regular as the other phone OEMs, Oppo has got one other specialty, too – BHE.

In the meanwhile, OPPO (whose livestream is running at the same time as QCOM) is pushing its VOOC fast charging to 150W 😳 #OPPOxMWC22 pic.twitter.com/DU9OF0kP2U

The current standard in the fast battery charging industry is about 800 charging cycles, where the battery gets to an 80% health deterioration threshold. But with BHC, Oppo claims to make it 1,600 charging cycles to reach the 80% threshold. And Oppo said this would be the standard rate at which all of its future smartphones will come with.

The company said that the upcoming OnePlus flagship phone, scheduled in Q2 this year, will come with a 150W SuperVOOC flash charge. Also, Oppo tested a grand 240W SuperVOOC fast charging technology too at the MWC event. And it boasts to juice up a 4,500mAh battery in just nine minutes!