One of the finest battle royale games, PUBG has just added a new mode in its PC and Console gaming update. The new mode, Team Deathmatch is a fight among two teams with 8 players each! This new mode can be found under the Arcade section and has three rounds to be played, where the team which dominates any two rounds, wins.

Any update from PUBG is always exciting. Though it hears less from the community ideas, it always brings what’s wanted by them. The new mode was brought to only PCs and Console versions, excluding Mobile. Yet, satisfying the makers that this mode having potential can eventually bring it to Mobile too.

This new Team Deathmatch Mode can be found in the Arcade section of game lobby, under Play tab and beside the Public Match option. This is available only in the FPP mode and upon entering, you’ll be dumped into any one of the seven battlegrounds with the eight-person team, fighting against each other. 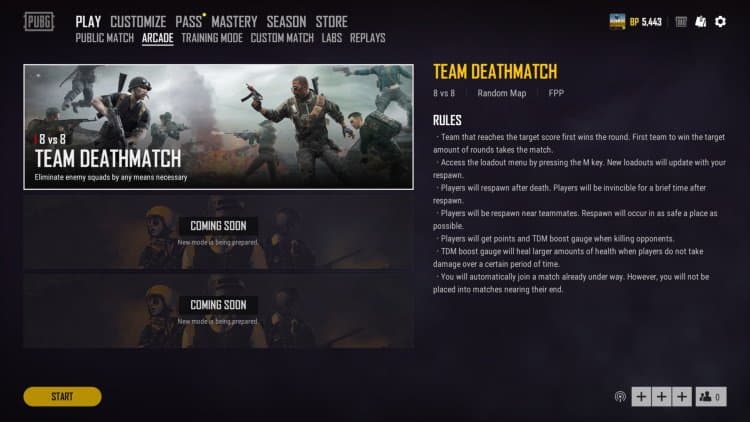 The major variances one can see here is in Spawn Kits and Respawning ability. Here, you may choose among 1 Shotgun kit, 2 DMR kits, 2 SR kits, 2 AR kits and 1 SMG kit. Further, friendly firing is disabled and there’s a boost gauge you gotta consider improving. This builds based on the assists and kills you do.

This new mode has three rounds to play, where the team winning at least two, wins the mode. And winning a round needs fastest 50 kills by one team or maxim kills by any team in a 10-minute round. Moreover, it has specific locations from the current maps that are bounded by the blue zone. These include Stalber from Erangel,
Podvosto from Vikendi, the Docks of Sanhok and others. A player can go out of the zone to kill enemies and gain points, but sacrifice their health for that.