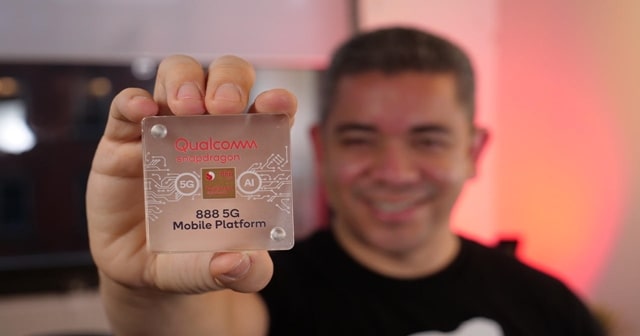 After many comparisons and benchmark leaks, Qualcomm has officially unveiled its next flagship processor – Snapdragon 888. This is also the company’s first offering having an integrated 5G modem, supporting both the bands. While it still doesn’t cross the 3GHz core speed, it’s equipped with all the latest technologies to power flagships handsets in 2021.

The company has a typical reason for it too. It said the number 888 is a lucky one in China. Thus it’s 888. This shows how important the Chinese market is for an American company.

Talking about the specifications, the all-new Snapdragon 888 comes with Adreno 660 GPU, which supports the latest Bluetooth 5.2 and Wi-Fi 6E.

Regarding the chip, it’s an octa-core processor with the Cortex X1 as the primary core, clocking at 2.84GHz. Further, there are three Cortex A78 clocking at 2.4GHz and four Cortex A55 power-efficient clocking at 1.8GHz.

The 5G connectivity embedded into the chip comes from the third generation Snapdragon X60 modem and supports both the Sub-6GHz and mmWave bands. Alongside, it supports multi-SIM functions and Dynamic Spectrum Sharing (DSS).

Talking about imaging, it can process 2.7 billion pixels per second, thus able to support 120 FPS by a 12MP camera.

With Xiaomi’s Mi 11 coming first with this chip, here are all the smartphone brands using this latest chip for their flagships next year;