After revamping all the default apps in Windows 11, Microsoft is seen testing a new version of Task Manager lately. This is tagged as a ‘TaskManagerRejuvenated’ and is currently available in the latest Windows 11 Dev channel.

While it didn’t bring any new features to the Task Manager, it revamped the overall design while including the same old elements within. Also, there’s a new hero section that mentions your device name and the model it’s running on. Here’s more about it and how to experience the new Task Manager;

Considering all the criticism, Microsoft has greatly redesigned most of its elements in the Windows 11 OS. From Settings to File Explorer and Taskbar to Start Menu, most of the default sections in Windows were revamped, but Task Manager!

The app which details the performance and resources consumption of various apps is left behind with the same old design, until today. Now, seen by a Windows developer named Gustave Monce, the latest Dev build of Windows 11 is having something called “TaskManagerRejuvenated“.

When enabled, this revamps the Task Manager app slightly in terms of design, to make it look more modern and align with the Windows 11 Fluent Design. It still carries the same old sections as Processes, Performance, App History, Startup apps, Users, Details, and services, but in a different scheme. 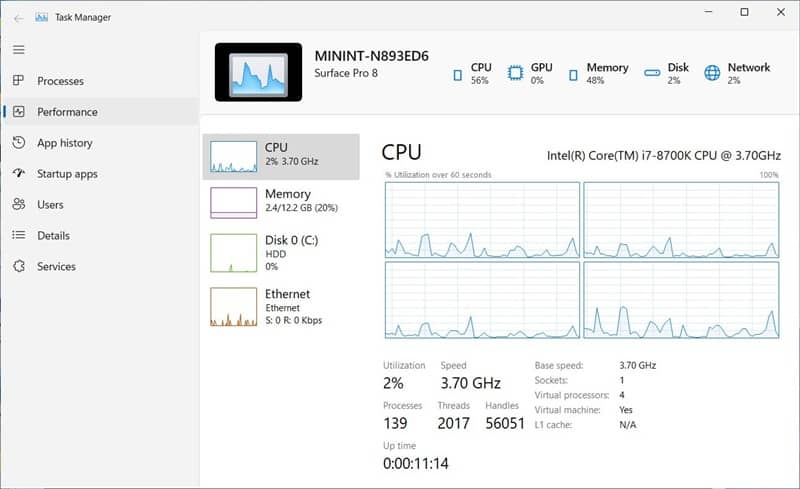 All these tabs are now listed in vertical mode, on the left side of the window. Users can utilize the new Task Manager as regular in past, for checking how much a process uses CPU and memory, terminating processes, managing auto-starting programs, etc.

Also, there’s a new ‘hero element’ added at the top of the new Task Manager, which showcases the computer’s name, its model, and the current resources being used. As of now, this section seems to be static, as it shows Surface 8 Pro as your device regardless of what you’re running the Windows 11 on.

And if you’re interested in trying this new Task Manager, here’s how to;

Before starting up, make sure you’re running on the Windows 11 lastest build (v22538 or later) and enrolled into the Dev channel. If these prerequisites are met, here you go;

Download and extract ViveTool, which enables the hidden developer features in Windows 10 and Windows 11.

Open Command Prompt with admin privileges, and navigate to the extracted ViveTool folder.

You can also add the below line to check the half-baked Hero Element too,

And if you want dark mode too, here’s how to enable it;

Once done by pressing Enter, the ViveTool says “Successfully set feature configuration“, so you can restart your computer to see the Rejuvenated Task Manager. Make sure you’re restarting after closing all the current Task Manager, and applications using it.