TechDator
Home News UMIDIGI A9: A Smartphone Running on Android 11 With an Infrared Thermometer 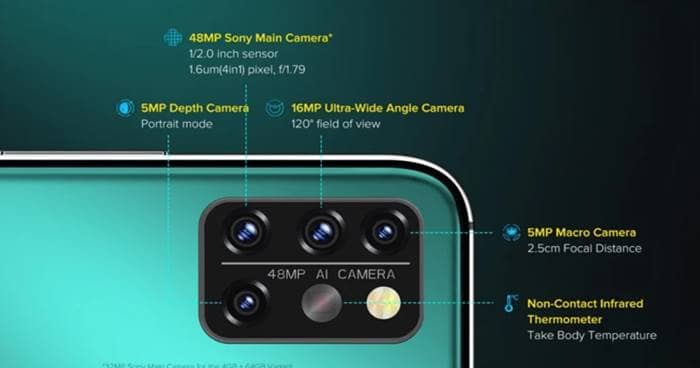 UMIDIGI, a fairly known Chinese OEM, has just launched a phone called UMIDIGI A9 with an infrared thermometer. This will make the handset the first in the world to have this feature, as it’s running on Android 11. This new handset has fair specifications to talk about and is launching globally. Here’s more;

Infrared Thermometer in a Smartphone

OEMs of smartphones are reinventing themselves to stay afloat in the tough market. A relatively new Chinese player called UMIDIGI has announced a new smartphone called UMIDIGI A9, that comes with an infrared thermometer sensor! This handset is a stripped-down variant of UMIDIGI A9 Pro.

Yet, it has a significant feature that makes it stand out among its competitors. It sports a 6.53″ HD+ display with 720×1600p resolution and a dot-drop notch design. It runs on MediaTek’s Helio G25 processor, based on a 12nm process, and has 2.0GHz as the peak clocking speed. In terms of storage, it has 3GB of LPDDR4X RAM and 64GB of onboard storage.

In imaging, it has a triple-rear setup lead by a 13MP primary lens, followed by an 8MP ultra-wide lens and a 2MP depth lens. Upfront, there’s a single 8MP end as the front camera. A rear-mounted fingerprint sensor has all the required connectivities and comes with a 5150mAh battery that supports 10W fast charging support.

It has a dedicated shortcut button at the left, which takes to the thermometer for checking the temperature of a body. This could be essential during the pandemic we’re living in. It works by placing the sensor inches closer to the body for a few seconds to read the temperature.

While a similar sensor is available in the Huawei’s Mate 40 RS Porsche Design edition, UMIDIGI A9 is cheaper than the Huawei’s handset and runs on Android 11 OS, making it special. It’s going on sale globally starting January 1st, 2021, for $99.99.