A recent survey made by The Washington Post revealed that US citizens trust Amazon and Google to handle their personal data effectively than Apple and Facebook.

The survey also had questions like whether they think their phones often hear what they’re talking about and how intrusive are the targeted ads from businesses. Many had voted negative for such questions, displaying their disgust on rising technology.

With the rise of new technologies and their usage awareness, many are hopping into this realm rapidly than ever before. And this only leads to two things – more data and concerns on how companies are handling it.

A recent survey on such concerns made by The Washington Post had revealed enough opinions to know who the US citizens feel about various questions, in this field. The survey contained over 1,000 respondents, and their opinions on various questions have gone as below;

To a question on how much they trust given companies on responsibly handling their personal data, a good number of respondents mentioned Google and Amazon as more trustable than Apple in this case! On the other hand, companies that lost trust in users, in this case, were TikTok, Facebook, and Instagram. 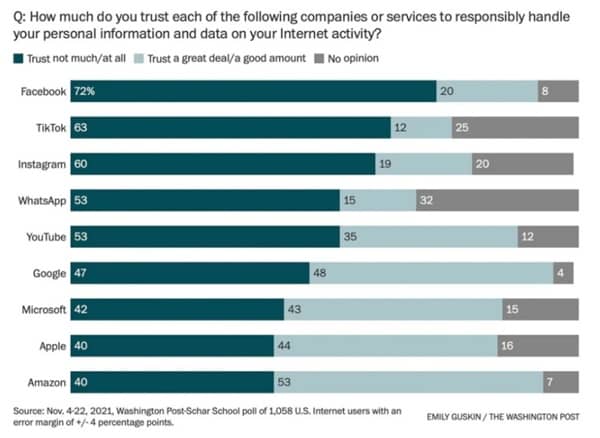 This question included other companies like Microsoft, YouTube, and WhatsApp too in the options. Another question asked the respondents how intrusive they find the online targeted ads, a whopping 82% of them said they’re annoying, 74% said invasive, and only 27% of people said they’re helpful.

A thing to note, this point doesn’t actually consider the 62% of iOS users who opted out of targeted ads, through Apple’s new App Tracking Transparency system. And at last, to a question on whether people think their phones listen to them when they talk over 72% of them agreed as “very often” or “somewhat often,” while 28% answered saying “rarely” or “never.”