WhatsApp in its latest compliance report as per the Indian IT Act said the platform has banned over 1.75 million in November 2021.

Also, other metrics like receiving over 602 grievance reports and 36 actioned reports were shared. WhatsApp stressed that it complies with all the relevant rules, provides tools for user safety online and a fine experience overall. 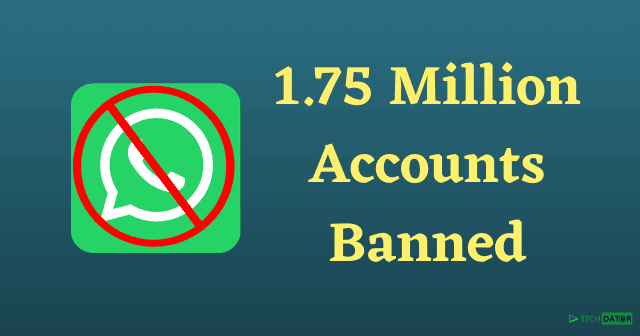 Last year, the Indian government brought a new IT Act that would force online platforms to be more responsible and transparent in their activities. Setting up a dedicated compliance officer and releasing a monthly report on their compliances is also a norm.

Under this, WhatsApp released the November 2021 compliance report yesterday, revealing facts on its actions. As per it, the Meta-owned instant messenger has received about 602 user reports, asking for product support (48), safety (27), account support (149), ban appeals (357), and other support (21).

Also Read- How to Fix WhatsApp Not Responding Error on Android?

In the same month, WhatsApp has banned about 17,59,000 Indian accounts, after verifying them in various ways. This happens in a proper sequential manner, says WhatsApp. From self-detection to user reports and analysis to actions, WhatsApp receives reports from users, uses their self-detection mechanisms and the acts.

It said users can report any specific message or a chat conversation to their support team, and let WhatsApp act on it accordingly. Once a user reports, WhatsApp receives the reported group or user ID, information on when the message was sent, and the type of message sent (image, video, text, etc.).

Also, WhatsApp said they had 36 accounts “actioned” in November 2021, against a ban appeal. These include banning and revival from bans. WhatsApp is supposed to report all these metrics monthly, as per the amended IT Act brought by the Indian government in May last year.