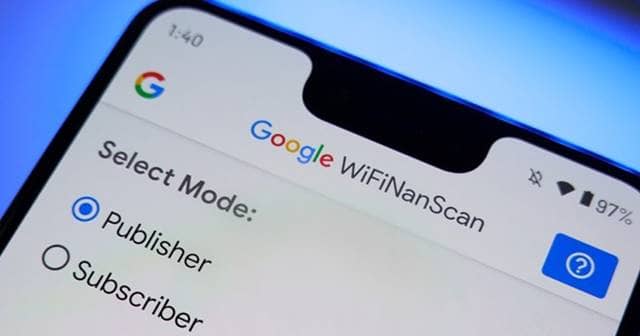 Google has released a new app called WifiNanScan in Playstore, based on Wi-Fi Aware protocol. This service can be used by developers and researchers to connect nearby devices without any connection and to measure the distance, send files, and communicate. Third-party apps can also use this peer-to-peer service for embedding the above functionalities.

Connecting via Wi-Fi to Communicate

WifiNanScan, an app launched by Google, has several use cases to take advantage of. As reported by 9to5google, the WifiNanScan can let users scan for nearby supported devices and add them to its network without any connection. This means, connecting to a nearby device now doesn’t need active Bluetooth or internet connectivity.

This service is based on Wi-Fi Aware, also known as the Neighbor Awareness Networking (NAN). As Google said,

“With this app, it is possible to obtain a distance measurement with a precision of about one meter with phones up to 15 meters apart. Developers, OEMs, and researchers can use this tool to validate distance/range measurements enabling the development of peer-to-peer ranging and data transfer, find my phone and context-aware applications based on the WiFi Aware/ NAN API.”

It’s powerful to offer connectivity ranges farther than the current Bluetooth range. Available for Android devices running on Android 8 Oreo and above, this new app based on Wi-Fi Aware protocol can be used for transferring large files, quick communication tracking the traffic nearby.

This app is meant for researchers, developers, and device OEMs, who can embed this technology in their services/devices to connect to nearby devices easily and communicate. The WifiNanScan app is available in Playstore to try for free.