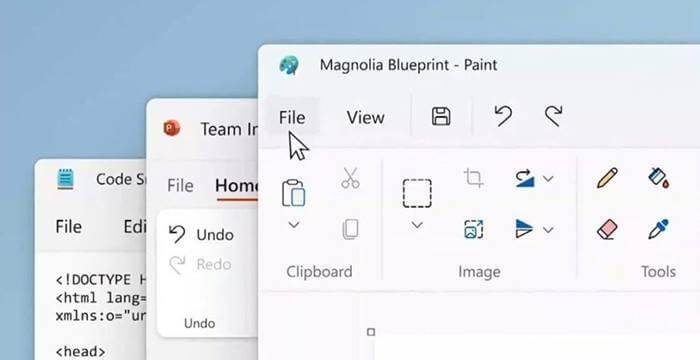 Microsoft’s new Windows 11 is more of a design upgrade than features that can aid our daily lives. The maker has revamped most default apps with a new look, making them appealing to users now.

The few prominent ones are Notepad and Paint, where both the utility apps are now revamped with Fluent Design to look easier, cleaner, and more suitable with the OS. Here’s more;

Design Changes to Notepad and Paint

After all, Microsoft’s revelation of Windows 11 has one thing that excited consumers – Design Changes. The maker has tuned the look of most default apps in its latest OS to make them more appealing to the users.

This major UI overhaul is inspired by the Windows 10X OS, which paused (or dead) for various reasons. Yet, most apps have received sweeping UI changes from it.

As we’ve noted from the event, Microsoft showcased the design made to Paint and Notepad in terms of icons, typography, animations, etc. In addition, from the shared images, we can see the app window corners being rounded, thus being smoother than sharp edges as now.

Further, in Paint, we see the app’s internal typography and features alignment as much cleaner and light, making it simple. Also, the undo/redo and Save buttons are shifted from the toolbar to the above row, where set beside File and View options.

There are no significant functional changes made in terms of Notepad, but the app’s window gets rounded corners as usual. While we may know more about these soon after getting hands-on with the official build, Microsoft has also teased the looks of Settings and File Explorer.

The Settings app in special is seen having colorful icons within. All these are made to be much lighter and be aligned with the base OS perfectly.