Microsoft’s new successor for its Xbox one is the Xbox Series X. This fourth-generation gaming console was teased last year and gave an idea of how it would look like. The compact shaped standing box is set to go public in late 2020, probably along with its rival’s PS5. Until then, we notice few leaks from who got their hands on it really and are revealed in Twitter like this.

A Twitter user with name @Doug_DragoX has today revealed two images of Xbox series X, which seemed to be real. The front and back end pictures of this device show the basic grilled design, USB/HDMI ports, power plug, Ethernet cable and card slots. This leak was confirmed to be authentic by another user later. 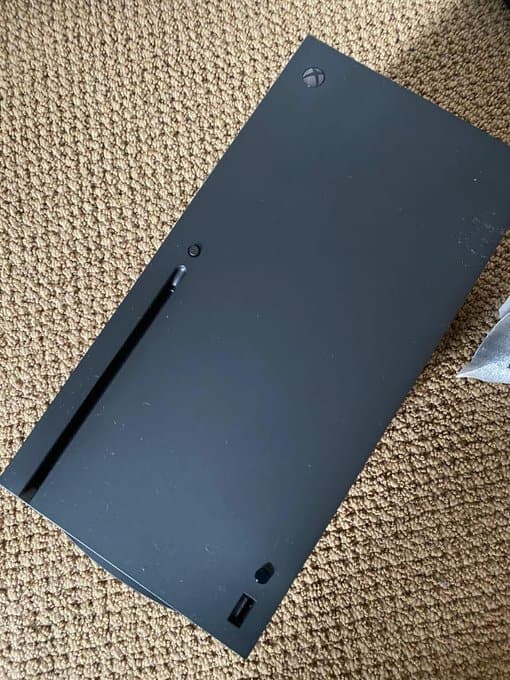 Reading through comments, we found out that a person who actually tried registering this device. And it worked! He copied the serial number and created an account with Microsoft. But he later admitted to being deregistering that account. Breaking this news further, a close observation onto images clearly shows it was a PROTOTYPE and it’s NOT FOR SALE.

Damn, isn’t it? However, this could be the real shows off how the machine looks like. As other than what Microsoft showed us in its teaser, we haven’t seen the real Xbox series X anywhere yet. Other than physical design, it’s reported that this new series is backwards compatible for all the games of Xbox One and Xbox 360 are supported on this new console.

Sony, being Microsoft’s arch-rival in console gaming, is all set to launch its latest console this same year, probably coinciding with Xbox series X as last quarter. While Sony hasn’t announced it yet, leaked images show the console to be typically constructed and may come with new joysticks too.