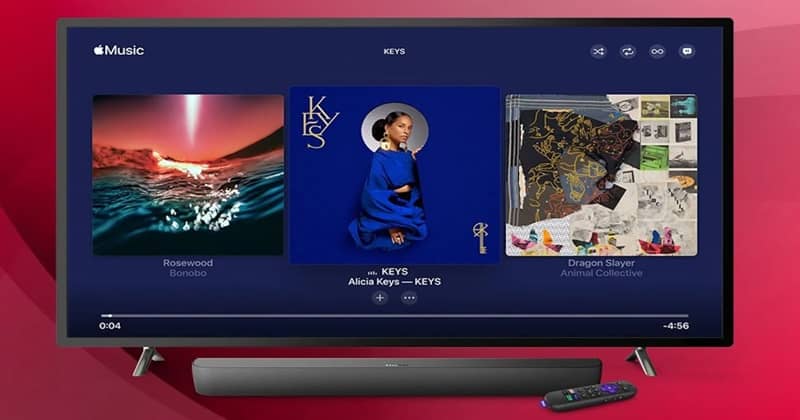 After bringing Apple TV+ in 2019, Roku is now listing the Apple Music app in its channel store. This will be available to all the Roku devices, starting today.

New Apple Music subscribers can get a one-month free trial, while the existing users can directly log in to view their personalized content, and access the vast library of Apple Music, including the live lyrics and 4K streaming of music videos.

With tens of millions of subscribers, Apple Music is one of the most widely used music streaming services around the world. The platform is a direct competitor to Spotify, which is another biggie in this industry.

Yet, Apple Music is the favorite of many Apple users, since it contains over 90 million songs, 30,000+ curated playlists for any occasion, a built-in radio service, live podcasts, and time-synced lyrics to most songs.

All these are now coming to Roku devices, including all types of Roku streaming players, Roku TV devices, and Roku premium audio devices. The company announced this on Monday, saying that users can all Apple Music users can now access the vast library ad-free.

Users can search for the Apple Music app in Roku’s channel store, install it and log in to “live stream today’s hits, classics, and country with the award-winning Apple Music Radio, as well as listen to songs, albums, and playlists from their own music library.”

Apple Music on Roku devices offers the full experience as we see in the Apple devices, including the live lyrics and 4K streaming of music videos.

This aside the Apple TV+ being available in the Roku store since 2019. The Apple Music app is already available on Samsung smart TVs, gaming consoles, and other devices.