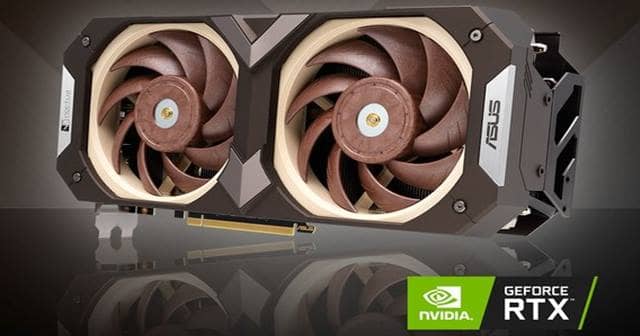 Asus is the first company to use Noctua’s fans for Nvidia’s RTX 3070 GPU and has two variants produced from this partnership. But, boasting as the world’s silent GPU, either company has not revealed the price or exact availability yet.

Clarifying the rumors prevailing, Asus and Noctua have just announced their collaboration in producing the new ASUS GeForce RTX 3070 Noctua Edition. This makes Asus the world’s first company to use Noctua’s fans.

Proudly announcing the ultra-quiet @ASUS GeForce RTX 3070 Noctua Edition: the world’s first graphics card to use Noctua fans and a tailored heatsink in order to achieve a reduction in noise levels of up to 15dB(A): https://t.co/d5nHQbKYt5https://t.co/6T0d8Im75O pic.twitter.com/B4VUUklSLZ

While the regular Noctua edition has a 1725Mhz in gaming mode, the OC edition goes upto 1815Mhz. Also, overclocking them raises the speed bars to 1755Mhz and 1845Mhz, respectively.

Experts say that with adequate ventilation in your PC case and running at a fair (around 24°) temperature environment, you can even achieve a noise level of 5.7dB(A)! Also, this GPU is capable of switching the fans off when the internal temperature goes below 50°C.

At all these capabilities, expect these new cards (both the standard and OC Noctua editions) to be priced slightly higher than the regular RTX 3070 GPUs in the wild. No pricing details are announced for either of these cards, but they should be available by the end of this month, sold by Asus and its partners.