As per reports from the Australian scamwatch, Australians have lost more than AUD850 million in 2020. The various scams they have reported range from investments to dating and remote access frauds.

Also, social media and cryptocurrency scams are amounting to millions of AUD and have risen sharply due to last year’s pandemic.

Online scams aren’t new, but people fall for them even now. While this is because of victim’s ignorance, scammers to are tricking people with novel techniques.

As various scams are prevailing now, here’s a report from the Australian Competition and Consumer Commission’s (ACCC) Scamwatch on how much their netizens lost in 2020. 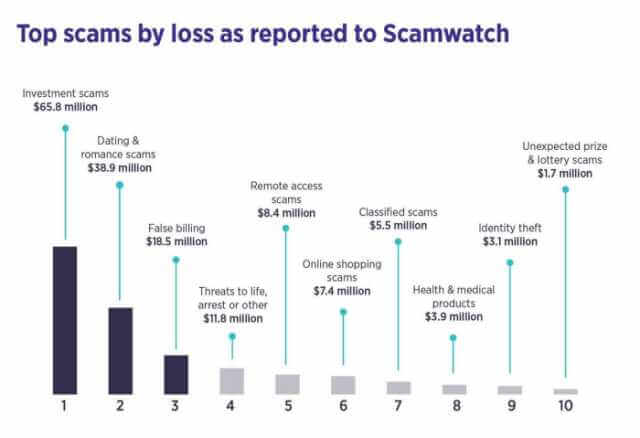 The grand figure stood at AUD 851 million, coming from a total of 216,087 scams in 2020. The number is huge compared to 2019, as scammers have leveraged the pandemic in all ways possible. Detailing more, the business email compromise (BEC) attacks cost AUD128 million, the remote access scams with AUD8.4 million, identity theft causing AUD3.1 million in losses.

The report noted that the bank frauds stood first with over AUD97 million in theft, whereas the cryptocurrency scams stood second, accounting for AUD26.5 million. As people are getting more onto online, scammers have leveraged various mediums of this space to rob them more cleverly.

It’s said the ‘internet’ section from ACCC’s report accounted for 6.3% frauds, email accounting for 22%, text message for 15%, and 4.5% were scammed through social media platforms. While phone calls pulled off these account for half of the cases, about 47.7% (103,153 scams)!

People aged over 65 years constitute falling for most of the scams (lost AUD37.7 million), where people aged between 25-34 years have made significant losses. And in terms of gender ratio, men and women share 50-50 of being victimized.